From the June 2019 print edition

Technology is transforming many areas of modern life and the supply chain is no exception. The so-called Industry 4.0—the trend towards automation and data exchange in manufacturing—is shaping the way companies do business, interact with their customers and workers, process and manage the information at their disposal and so on. 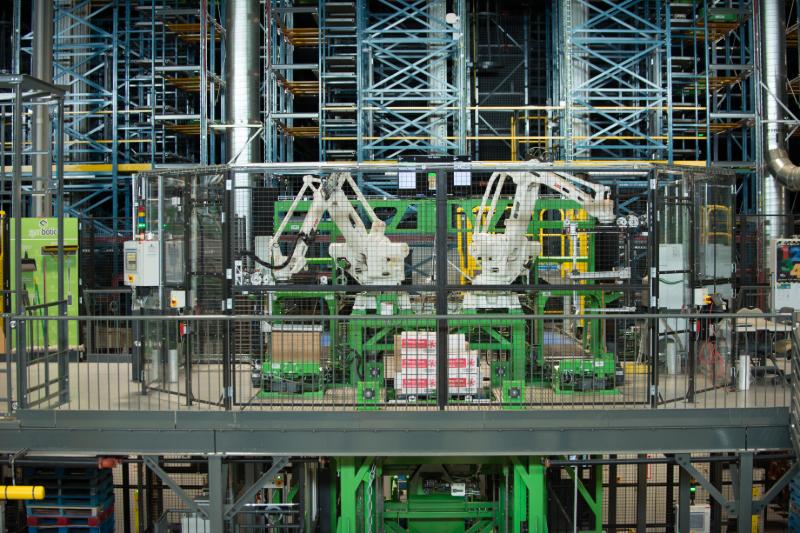 Robotics, one of the technology trends under the Industry 4.0 banner, offers several applications within the supply chain. For example, robots provide an advantage in warehouses for packaging and palletizing applications like lifting and moving heavy objects, says Jean-Philippe Jobin, chief technology officer for Quebec-based Robotiq. Online retailer Amazon provides an excellent example of using robots in warehouses for these tasks. Robots are also used often for picking applications in warehouses and an emerging trend is using them in sorting applications as well. There is still work ahead in figuring out how to use robots to sort, since identifying items with different shapes, sizes and materials remains a challenge.

Robots are also working alongside people more often, giving rise to the term ‘cobots.’ The packaging process is an example of where humans and robots can work together, says Jobin. Since today’s supply chains are so complex, people will always play a vital role. However, robots will be used for tasks deemed ‘dirty, dangerous and dull.’ And the sky is the limit when it comes to how robots will be used in the future. “You can see developments are being made to use them in sorting applications and in inventory management,” Jobin says. “We can expect to continue seeing them being used in more distribution centres as well.”

Robots on the move
Among other trends in those distribution centres is that robots can travel around objects more easily than before, says John Hayes, VP of sales for Cambridge, Massachusetts-based Vecna Robotics. Robots used in DCs were once called automated guided vehicles, which are constrained to a specific path. But the automated mobile robot (AMR) available today uses path planning and can drive around objects and obstacles in its path, Hayes says.

As well, instead of robots moving pallets, they are becoming picking solutions. Driven by retail, many organizations are using several small robots in their DCs rather than larger ones designed to move entire pallets. This, Hayes notes, has encouraged the rise of “cobots”, or robots that work alongside people.

The AGV system allowed the robot to follow a specific path before moving to the use of floor magnets, then laser guidance, Hayes says. Today, robots don’t always need to follow specific paths. The facility floor can be mapped and both lasers and vision technology used before setting up specifically where a robotic vehicle can go. A robotic vehicle can learn the best paths, and areas to avoid, within a facility, such as a lunchroom or areas with high human traffic.

Or, if pallets, boxes or other objects aren’t in the correct location, robotic vehicles employ cameras and sensors to drive to the correct pallet. Systems can spot problems, such as a hole in the floor, and go around the obstruction. Robots relying on older systems would simply stop moving. “It’s a different way of approaching the application,” Hayes says.

Another significant, recent technology advance has to do with software. Rather than having a rigid set of operating parameters, the system can improve over time. “The biggest trend is the AI component and the adaptive solution now,” Hayes says. “Things are definitely changing.”
Previously, organizations would have to buy a workforce control system (WCS) that would then interface with other systems in the facility like the warehouse management system. The WCS might be large, cumbersome and expensive to install, Hayes says. But the rise of cobotics companies means the WCS is no longer needed because the software (Vecna’s software, for example, is called Pivotal) can visualize what needs to be done. The software can issue orders to the most appropriate resources (person), rather than relying on the WCS to do so. “The fact that you can bring the work to the employee and pick the most appropriate employee is what’s moving cobotics forward,” Hayes says.

But while the trend is towards automation, the primary goal is to makes people’s work experience better throughthat automation rather than to replace them, Hayes stresses. The first step in that process is, instead of people walking around the facility, they stay in their zone and the robots go to the next location. Ultimately, robots will be able to pick and place from one bin to an outbound bin that, basically, goes straight out the door. At that point, Hayes says, the facility has reached a state pretty close to lights-out. Such a state is still likely between five and 10 years away, he notes.
The material handling paradigm has changed so much that, when speaking with vendors, it helps to look not just at today, but what’s coming in the future, Hayes says. Things change and technology advances quickly, so sit down with vendors, consultants, and others to discuss the future state of your operations. “If you simply simulated what you have and not look towards what it could do because of the technology, you’re probably not getting as big a return as you could,” he says.

Giant Tiger’s transformation
The use of technology is growing, says John Hubbard, VP of distribution operation at Canadian retailer Giant Tiger. More companies are offering robotics, making such solutions more cost effective and viable. Success in retail means meeting customer demands, and as those demands grow organizations must find fresh ways to do that.

To support growth of 12 to 15 new stores a year, Giant Tiger recently amalgamated three distribution centres near Ottawa under one roof in Johnstown, roughly 40 minutes south of the country’s capital. The new 90,000sq-ft structure, which Giant Tiger finished moving into last January, meant a huge investment in technology, and now houses 240 autonomous bots. “When we looked at this facility we had to decide, what is our strategic plan for the next five, 10 years and beyond?” Hubbard says. “If we’re going to go into this capital investment now, we want to make sure it’s viable 10 years from now. We had to bring robotics into the mix, and that’s what we did.”

Hubbard describes the robots’ activity at the DC as “almost like an ant farm,” in which the robots put away and retrieve boxes throughout the day and night. The bots are equipped with capacitors which allows them to run on static electricity. Large robotic arms work in tandem to unpack inbound pallets while building outbound ones. Boston-based Symbotic supplied the technology. “We’re kind of proud to mention that it’s the first system installed in Canada,” Hubbard says.

The robots and people work together every day, Hubbard says. People, he notes, will always be a part of the business due to the odd-sized and shaped goods the store sells that robots simply can’t handle without help. When designing the system and new facility, Giant Tiger removed many of the pain points staff encountered with manual processes. The relationship between employees and robots is one of opportunity, Hubbard says, in which humans’ jobs are made easier. But the learning opportunities are considerable and make for a more skilled workforce.

Before moving to the new facility, Giant Tiger had complete manual pick outside of a WMS that had RF, putaway and retrieval and replenishment, Hubbard says. While the transformation represented quite the leap, Hubbard says he now sees no viable option other than investing in robotic technology to keep up with the growth the organization planned. “With the robotics and the installation, we were able to save a ton of square footage on the overall design of our building,” Hubbard says. “We were able to, instead of go wide, go high, with the automation.”

Hubbard advises companies to understand the operational side of their business, and have a strong operational process in place, before moving far along with technology. If the process is flawed to begin with, robots will simply perform a flawed process faster. Rather, look at business needs down the road, the overall strategy and how robots can help achieve that.

“Robotics is not as simple as plugging it in and it just starts processing orders and all your problems go away,” he says. “Robotics are only as good as what information you feed them. Automation technology is definitely a viable option for organizations however the implementation can make or break the business case.”

Robots in manufacturing and supply chain can wind up becoming “a tool looking for process,” says David Schwebel, VP of business development and market intelligence at Swisslog. While there are numerous autonomous mobile robots on the market, many perform a task but don’t provide a total solution. “It becomes islands of automation,” he says. It’s better to view robots as pieces of a larger solution that augment human work rather than replacing it.

That augmentation is only set to increase, Schwebel said. While archaic professions like typesetting and lamp lighting have disappeared, automation in supply chain will be a driving force in job creation rather than replacement. The positions most targeted for such augmentation will be physical and repetitive, leading to greater safety and job satisfaction.

When it comes to robotics adoption, smaller works, says Schwebel. It’s better to spend $1 million on robotics ten times over than to spend $10 million once—learn first, scale later, he advises. At the same time speed is important and robotics adoption projects should take place over months rather than years. As well, perfection is overrated, and the 80/20 rule applies.

Finally, don’t try to do it all in a vacuum, Schwebel says. There are currently many more failures in robotics than successes. When possible, work with other companies that have already adopted these technologies and learn from their experiences.

There’s no doubt that, in many ways, robotics is the future for manufacturing and the supply chain. And like all new technologies there are risks involved. But with planning and a clear vision of their future direction and goals, organizations can reap the maximum gain from new technologies while minimizing the bumps along the way. SP

Slow it down—the importance of patience in negotiations