Ahead of the digital curve

From the August 2019 print edition

The annual ProMat show boasts a huge turnout in the tens of thousands, but this year’s show in Chicago in April saw record attendance even by those standards. Registration hit 49,718—an 11-per cent increase over the last show in 2017. The expo covered 425,000sq.-ft. of exhibit space on two show floors and saw 938 companies exhibit. The conference included a keynote panel discussing the 2019 MHI Annual Industry Report—Elevating Supply Chain Digital Consciousness. MHI released the sixth in a series of annual industry reports in collaboration with Deloitte Consulting. 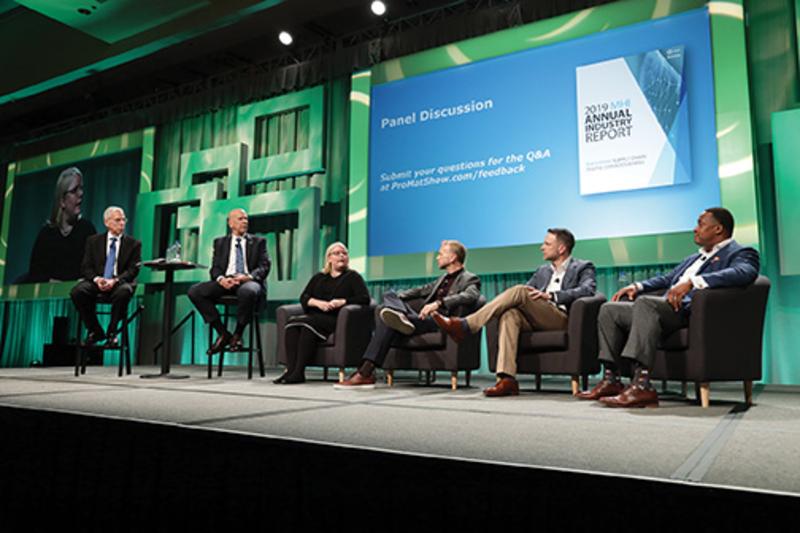 According to this year’s report, eight of 10 survey respondents say digital supply chains will be the dominant model within five years. The survey suggests that investment in supply chain innovation is at an inflection point, with a trend of declining investment from 2015 to 2018 countered by a 95-per cent increase in projected spending this year. Overall, 57 pe rcent are planning new technology investments totaling over $1 million over the next two years. The report provides updates on innovative technologies and respondents cited robotics and automation as most likely to offer disruption or competitive advantage (64 per cent), followed by predictive analytics (59 per cent). AI (55 per cent) and IoT (52 per cent) also scored high, as did wireless vehicles and drones, at 51 per cent.

Cloud computing had the highest adoption rate, at 56 per cent. That’s expected to reach 91 percent over five years. Predictive analytics is expected to reach an 87-per cent adoption rate, followed by IoT at 80 per cent, robotics and automation at 72 per cent and artificial intelligence at 55 per cent. A skilled, digital workforce is needed to implement technology—and the talent gap is growing. The top skills to compete are analytics/modeling/visualization (40 per cent), strategic problem solving (37 per cent) and general business acumen and cross-functional knowledge (31 per cent).
The report defines digital adoption in four stages: data collection; digital connectivity; generate increasing value and insights from that base data; through automation, advanced analytics and artificial intelligence.

The report includes a supply chain digital consciousness framework to help organizations assess their digital mindset and progress. The framework characterizes a supply chain on four levels of awareness—from dormant to elevated—and across categories including leadership, talent development and workplace culture, technology and innovation adoption as well as customer experience. The report includes an assessment tool to measure where they are via a Supply Chain Digital Consciousness Index (DCI).

The panel discussed the finding that adoption will rise over the next five years. “It tells me that reality is finally starting to set in,” Bradley told the audience. Organizations have been tactical in their adoption but are getting more strategic. Since many new technologies are disruptive, companies may see short-term, negative results before value rises. “Organizations have entered the zone of what we refer to as necessity,” he said. “You can no longer sit on the sideline.”

Danek-Akey highlighted Penguin Random House’s digital technology adoption. Progress depends on the area, she noted. Penguin has a warehouse management system and a TMS to help determine when trucks will arrive. The company has forklifts equipped with sensors and is interested in using drones for cycle counting. In discussing what innovations are leading to more supply chain robotics, Leifer noted three converging elements. First, AI’s growing sophistication lets robots operate in unstructured environments. Secondly, robotics components are getting less expensive, while the third factor stems from the fact that a labour shortage means that companies must act immediately.

Panelists commented on AI’s potential, which Liefer called massive. “We’re just scratching the surface of what we can do,” he said. AI learning has become general, Liefer pointed out. The same technology used to cool data centres and run windfarms can be used within robots to manipulate physical objects.
Bradley said some industries are adopting AI even if they’re not associated with the technology. Oil and gas and the power and utility industry, for example, are sectors with heavy assets looking to improve asset use. Bradley cited a cement manufacturer that’s leveraging AI to help understand which assets to use in cement production and how to utilize them. “They’re using artificial intelligence where they’ve previously relied on one individual in a control room monitoring everything and knowing that individual is going to ignore some things,” he said.

Danek-Akey said while the skills gap and workforce shortage ranked first on the survey, she didn’t consider it one of her top issues—but she’s aware of difficulties. Lead times can be longer because the right workers aren’t in place. Her company uses training for current employees and creative ways to recruit. There are apps allowing workers to input their available hours, who are then matched to companies. “If you’re willing to go the extra mile, you will find a workforce,” she said.

Products
With close to 1,000 exhibiting companies at ProMat 2019, there was no shortage of products to peruse. Yale showcased its first counterbalanced lift truck with a factory-integrated lithium-ion battery pack. Designing the Yale ERPVL around a lithium-ion battery pack reduces truck weight for better acceleration and reduced energy consumption, the company said. The battery’s smaller size opens space under the seat for improved access and convenience. Meanwhile, Swisslog displayed its robotic picking solution, ItemPiQ. The product is redesigned with new robotic technology and an intelligent vision system for higher pick rates and machine-learning capabilities. It combines a Swisslog gripper system with new technology for speeds of up to 1,000 picks per hour. The six-axis lightweight robot works in tight spaces and the robotic arm extends up to 43 inches.

SSI SCHAEFER highlighted its SSI Flexi Shuttle, which handles a variety of stored goods with a storage capacity of up to 50kg, due to an adjustable-width load handling device. The system is adaptable for storage location sizes. This works by having flexible positioning within the racking system. The design allows installation at any position throughout the storage aisles and combines automated storage, buffering and sequencing.

RightHand Robotics announced the RightPick2, the company’s next-generation, integrated software and hardware product platform. The product is an autonomous piece-picking platform for picking and placing individual items. It works with employees and manual or automated systems. RightPick2 also won Best Innovation of an Existing Product during the MHI Innovation Awards.

Learning opportunities
The conference featured educational seminars with many of those sessions focusing on supply chain trends. One session, called Optimizing the future of connected supply chain and led by James Hendrickson, director of product management at Honeywell, looked at what’s driving change and what organizations can do to leverage technology and processes.

Hendrickson mentioned the cost of unproductive time in distribution and fulfillment, saying there is an average of 22 unproductive minutes per eight-hour day, per worker. There are an average of 134 mispicks per week, while $400,000 is the annual cost of mispicks reported by the average distribution centre. “The stakes of these types of things get extraordinarily higher as you move into the e-commerce space where the importance of getting that pick right is critically important,” Hendrickson said.

One trend, urbanization, allows companies to service a large number of customers. Delivering across a wide area gets expensive, he said. But it makes it even harder to serve people with modern omnichannel, ecommerce ideals. Another trend is towards transparency, which Hendrickson said has become a must. Measuring data and increasing transparency are powerful tools for managing the risks and grasping the opportunities of global supply chains, he noted. A third trend involves ergonomics and worker wellbeing. It pays to look at workers as a part of the value chain, he said. By comparing employee steps between picks, companies can look at ways to optimize the process. The fourth trend involved technological innovation. Data is now important and businesses need solutions to collect data and make it actionable, he said.

With a record turnout, products and networking and education opportunities, ProMat 2019 offered something for every attendee.