Automated guided vehicles (AGV) have been around since the 1950s when they were used primarily in warehouses for material handling applications, like moving large quantities of goods during the shipping and receiving process – usually done with a towing AGV. These early AGVs operated on a taped or wire-based system which guided them on predetermined, simplistic and repetitive paths. 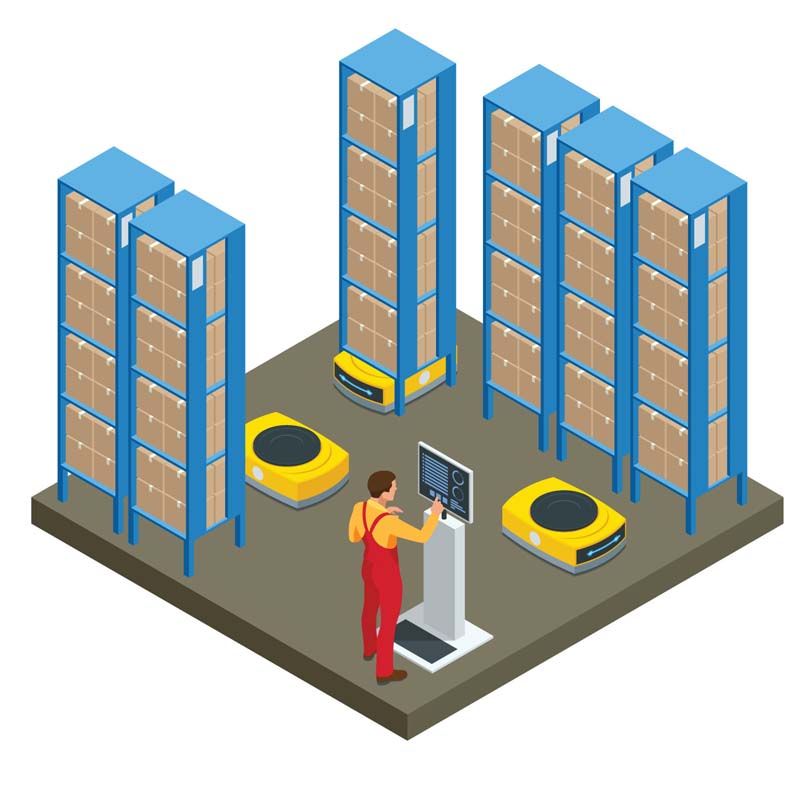 The mass retail boom in the 1990s and the e-commerce explosion of the 2000s pushed the demand for AGVs to new levels with AGVs taking on a larger role in warehouse automation. Since then, AGVs have become more commonplace across many industries including, most notably, in manufacturing and industrial applications. In addition, AGVs have evolved greatly in their functionality and costing as technology has changed.

Types of AGV
Automated guided vehicles differ greatly from their more advanced and progressive cousins, automated mobile robots, which are highly autonomous and can learn their surroundings based on blueprints uploaded to their systems or follow employees throughout a facility. In contrast, AGVs travel along a fixed guidance path, most commonly a flexible magnetic or coloured trail, embedded wire track or wireless navigation which is based on distances between sensors or reflectors. There are six common types of AGVs, including: assembly line; automated guided carts; forklift; hybrid; towing vehicles and unit load.

An assembly line AGV creates a surface that moves in place of a fixed conveyor or an overhead crane system. The assembly line AGVs carry the unfinished or unassembled product from workstation to workstation for the employee or robot to complete their task for that station. The movement along the production line continues until the product is finished. This type of AGV is frequently used in the automotive manufacturing industry where a partially completed car moves from station to station for the operator (human or robot) to assemble a new component on the car until the end of the production line.
Automated guided carts (AGC) are the lower cost AGV option which follow a flexible magnetic or coloured tape adhered to the floor on a predetermined path and are generally smaller in size and offer a lower weight capacity than other types of AGV. They can be easily adapted to reflect changes in the environment they are used in by simply re-affixing the flexible magnetic tape in a new guidance path as the surroundings change, making these a good solution for both budget conscience applications and tight quarters which require a smaller footprint solution. Common uses for AGC include moving compact loads through a facility such as a hospital and transporting food trays, linens or medical supplies.

Forklift AGV are similar to an automated forklift that moves and lift palletized goods using the frontloading forks of the AGV.

This includes moving pallets into spaces such as high-bay racking. These operate on a laser sensor platform to ensure their fully autonomous function in a warehouse environment to store and retrieve products.

A hybrid AGV is modified standard operator-based equipment which is dual-purpose and can function both autonomously and manually with a rider-operator guiding its path. Hybrid AGVs offers the most flexibility in terms of offering the benefits and ease of use of a fully autonomous AGV as well as the ability to function as manual transporting or lifting equipment. Hybrid AGVs are commonly used as forklifts in warehouses.

Towing vehicles (also referred to as tuggers) were one of the first AGVs. These are used
in pulling or towing applications such as moving trailers and trains either in a warehouse
or in a shipping or train yard.

Unit load AGVs have built-in conveyors which offer the ability to flex easily and adapt a production line as business demands change. The flexibility of unit load AGV also provides greater safety as it opens the work area for moving equipment or people. Unlike its fixed conveyor counterpart, if an issue is encountered in the process the production line doesn’t shut down; alternatively the process continues
as each step operates independently of the others. This type of AGV is frequently used in manufacturing, assembly and warehouse applications.

Trends
The most significant trend in the AGV market relates to technology advancements in the equipment for energy options and guidance systems.

A major challenge to AGVs being reliable has been their limited battery life. There was nothing worse during a production run than having an AGV going down without warning due to a discharged battery. To combat this, a well-known development in battery technology in the automotive industry has shifted into the AGV market as well. The introduction of lithium batteries means a power source that is fast charging, has eliminated maintenance and reduced gas emissions compared to traditional lead-acid and gel batteries.

The second evolution in energy options for AGVs is the battery-free and wireless AGV. This allows the equipment to run continuously through charging via inductive power transfer (IPT) technology whereby the AGV is powered wireless from the floor.

Trackless systems have grown in popularity whereby the AGV is guided by an operator’s voice, GPS or WIFI technology instead of traditional physical markers or tracks such as magnetic tape or reflectors. These advancements offer greater flexibility and adaptability as an organization’s operations change.

Supply chain benefits
Automated guided vehicles offer extensive overall benefits to an organization; however, the scope of the benefits will differ depending on the industry and the organization’s operations. The six most frequently occurring benefits from deploying AGVs include labour cost savings, utilities cost savings, improved safety, a reduction in damages, increased inventory productivity and accuracy.

Labour cost savings is the most common positive impact upon deploying AGV in an organization. The direct savings can be attributed to the reduced staff required to complete a task.

The additional advantages are further compounded when considering the long-term savings against salary increases and benefit payments.

AGVs can function in less-than-ideal working conditions when compared to a human workforce, as the equipment can operate in lower or higher temperatures than the average person. The savings of reduced electricity consumption from fewer hours of heating and cooling systems running can add up over the ownership lifetime of an AGV.

An AGV’s precision in terms of following predetermined paths leaves little room for error in terms of accidental collisions with products, racking other equipment or, worse yet, employees in the facility. This slim margin of error can dramatically generate savings for an organization due to reduced damages caused to the physical structure, its contents and the reduction in employee injury claims. During the pandemic when physical distancing has become the norm, AGVs have provided organizations with the ability to continue to operate without sacrificing the health of their employees by reducing the number of employees on site at the same time.

The improved inventory productivity and accuracy from adding an AGV to an operation can be dramatic in high-production facilities which manufacture in significant volumes and in very systematic methods. An AGV can operate at any time with minimal downtime due to breaks, vacations or injuries (with the exception of maintenance). As well, the precision of an AGV in following tight tolerances is unmatched in manufacturing settings of frequent and repetitive actions. The human operator will produce some variances at a much higher rate than an AGV. Lastly, the AGV can, in real-time, maintain an active inventory count while an operator must perform a more time-consuming and sometimes inaccurate physical count.

With the continued growth of e-commerce and the need for retailers and manufacturers to reduce operating costs, increase productivity and efficiency to remain competitive on the global stage; AGVs will be there to support organizations. The North American market alone for AGVs is estimated by the Mordor Intelligence Group to grow 14.6 per cent annually in 2021 and to reach a new record of nearly US$2.7 billion by 2026 (pre-pandemic impacts).

Automated guided vehicles can offer tremendous value to an organization depending on the industry; from distribution efficiencies in warehouses to reduced production times in manufacturing and even maintaining sterility or safety in sensitive sectors such as pharmaceuticals, healthcare and electronics.