From the February 2021 print edition

Many people think that connected and automated vehicles (CAVs) are primarily for carrying passengers. In fact, there is an increasing variety of non-passenger service vehicles based on CAV technology. These use cases comprise a range of activities including fleets of vehicles for logistics and providing services. 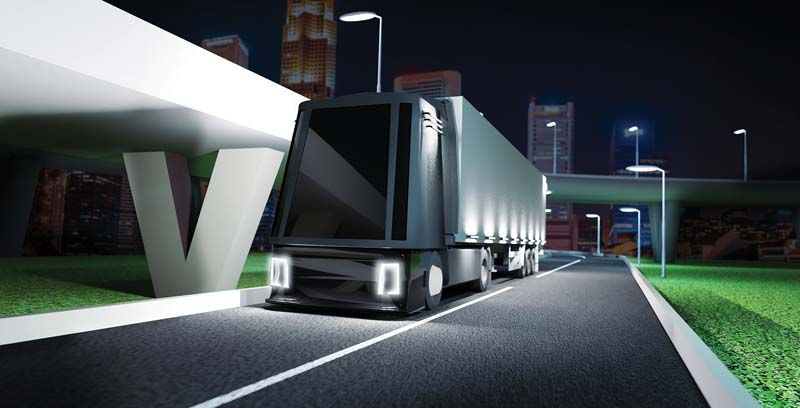 This article describes the current status of the entire CAV ecosystem, and then focuses on the logistics and service vehicle segments.

The CAV era has already started – but slowly. Many brands of new vehicles include various advanced driver assistance systems (ADAS), such as intelligent cruise control, lane keeping, and automatic emergency braking. These systems are a stepping-stone to CAVs.

In addition, fully automated vehicles are being tested. Some are in commercial use for specialized, low-speed applications in controlled environments, such as mining, agriculture and automated shuttles.
Fully automated driverless taxis (sometimes called robotaxis) are already in limited commercial use in the US and China. Neither of the robotaxi services in those countries use a chaperone driver – nor do the regulations require them. These vehicles are currently geographically constrained to areas that have been mapped with precision. The number of robotaxis in commercial use will ramp up throughout the 2020s, along with significant increases in the vehicle kilometres travelled (VKT).

From a technology perspective, there is significant overlap between passenger CAVs and the non-passenger vehicles mentioned above. Both categories of CAVs require sensors to detect people, animals and objects, as well as high reliability software, artificial intelligence (AI) and connectivity.
The rest of this article will focus on the delivery and service segments of the CAV ecosystem.

Local delivery CAVs
The market for CAVs used for delivery is showing substantial momentum. The reasons are that there are clear business cases for using them. In addition, some non-passenger CAV use cases (such as automated agriculture) have easier safety requirements. There are several segments to this market, including local delivery, long haul delivery and service vehicles. These are described below.

Within the segment for local deliveries, there are two sub-segments: vehicles for use on roads and smaller vehicles that travel on sidewalks.

There is a growing interest in the use of automated vehicles for deliveries within an urban area. These can be used for shipments between a warehouse and retail stores, as well as for deliveries to homes and offices. Increasingly, these vehicles are also fully electric.

In late 2020, Loblaws and Gatik announced that they would deploy Canada’s first autonomous delivery fleet. Readers will be familiar with Loblaws; Gatik is a California-based technology company that is deploying autonomous vehicles for business-to-business (B2B) applications known as “middle-mile logistics”. Since January 2021, Gatik has been providing Loblaws with a contactless delivery service for transporting goods from an automated packing facility to retail locations across the Greater Toronto Area (GTA). The stakeholders say that this is the first autonomous delivery fleet in Canada.

This announcement was preceded by a 10-month, on-road pilot project in Toronto. For the Loblaw service, Gatik is using Ford Transit trucks with its proprietary autonomous self-driving software for urban, suburban and highway driving. Initially, all vehicles will have a safety driver as a co-pilot.

A separate segment of the delivery market is smaller vehicles that travel on sidewalks. One example is “Timothy”, a small electric vehicle for delivering groceries to homes. Currently, the Timothy vehicles (all the vehicles in the fleet are called Timothy) are remotely controlled. We forecast that as the technology improves and the cost comes down, future Timothy models will be autonomous.

In the UK, a pilot project at London’s Heathrow Airport is testing the feasibility of using automated carriers to move cargo containers between the terminal and aircraft. The pilot is progressing well.
An interesting and futuristic variation of the use of robots for short-distance delivery is the work on two-legged robots being conducted by Boston Dynamics and others. These robots, which are somewhat similar in shape to a human with arms and legs, can carry a parcel between an automated delivery van and a house. The capability of these robots is increasing rapidly, and we can expect to see commercial deployments for various use cases over the next few years. (YouTube has some excellent videos of Boston Dynamics robots, including showing them dancing).

Long-haul logistics
There is also strong interest in autonomy for long-haul logistics. It is well-established that there is a shortage of long-distance truck drivers in Canada. Autonomy is a potential solution to that problem.
One model is to use humans to drive the trucks to a highway, park in a special transfer zone, get out, and let the truck drive itself to another city. At the destination city, the truck would park in another transfer zone, then wait for a human driver to arrive and drive it into the city. The benefit of this model is that it is easier to develop self-driving technology for driving on highways than it is for urban areas.

Service vehicles
One area where automated service vehicles are already in use is the home. Many people have bought the “Roomba” automated vacuum cleaners. You take it out of the box, put it on the floor, and it “learns” the house and room layouts using a technology known as simultaneous localization and mapping (SLAM). Some people have been known to give their Roomba a name!

For business fleet applications, there are various use cases for service vehicles in urban areas. One of these is automated snow clearing, and there are two categories. One is large, automated snowplows for clearing snow from roads. The other category is smaller vehicles that can autonomously clear snow from sidewalks. In this latter category, there are several initiatives.

One of these is the City of Grande Prairie, Alberta, which has conducted a pilot of an automated snowplow for clearing snow from a trail.

A related initiative is Top Hat Robotics, based in Kitchener ON, which has developed and is piloting an automated robot for sidewalk inspections. The pilots include a dozen Ontario cities and towns such as Kitchener, Richmond Hill and Markham.

Increasingly, municipalities are showing interest in fleets of automated robots for grass cutting, especially for large recreational areas and sports fields. This will allow the municipality to keep the grass cut to the optimum height without increasing the cost of labour.

This article shows there is a wide range of use cases. On the one hand, there are clear benefits and business cases for using CAVs for these applications.

On the other hand, there will be a reduction in the human resources needed for these jobs.
I hope that all levels of government will recognize this and arrange for the required safety nets and retraining.

It is also clear that during the 2020s, fleets of autonomous vehicles will be deployed in volume in the logistics chain. In addition, armies of robots will be deployed for service functions such as snow clearing and grass cutting.

A bit of spice

A bit of spice

Hauling into the New Year