In the world of commercial vans not that much changes year to year – mainly because the jobs these vehicles do don’t change much. 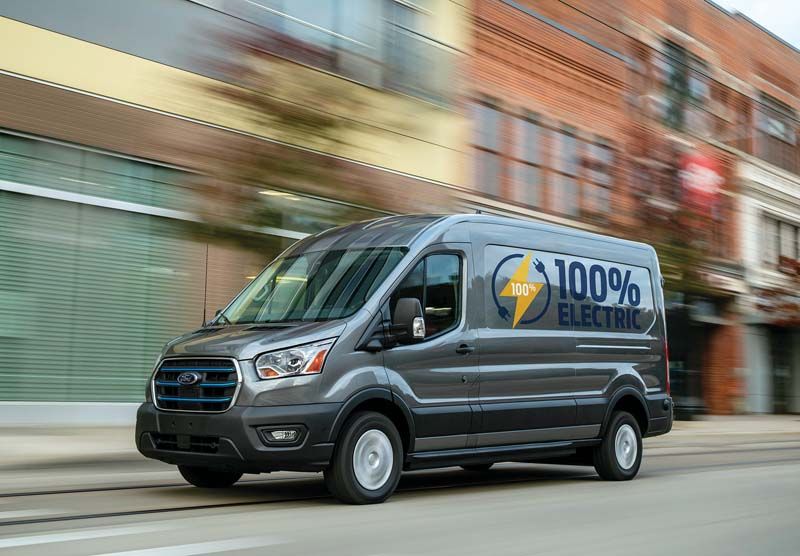 However, propulsion, as in what drives those vans, is changing. First off, Ford has brought its E-transit to market. This all-electric van looks just like its gas-powered cousin – but what drives it are electrons. This innovation follows GM’s introduction last year of the larger livery van, the BrightDrop. GM’s Ingersoll, Ontario plant has been retooled to deliver these fleet vehicles to the likes of FedEx and Merchants Fleet. In other news, Nissan is now fully out of the commercial van business.

With that, here’s a rundown of some of the vehicles available in the work van space.

2022 Ford Transit & E-Transit
For 2022 the Transit is a carry-over – emphasis this year is on the E-Transit, which offers the same interior cargo dimensions and most of the same mounting points as Ford Transit. The E-Transit can be ordered with accessories like bulkheads and shelving, so the van is ready to work on delivery. Customers can also work with any of the Ford-approved upfitters, including 13 located conveniently within 50km of Kansas City assembly plant. E-Transit offers the optional Pro Power Onboard, which provides up to 2.4KW of power. This transforms the vehicle into a mobile generator for powers tools and equipment on job sites. That’s enough power to run everything from belt sanders to circular saws. Ford says the average daily range for commercial vans in the US is 74 miles (75km). With a usable battery capacity of 68KWs, E-Transit has an available targeted range of 126 miles (200km) in the low-roof cargo van configuration.

The E-Transit battery is underneath the vehicle body, allowing for up to 487.3 cubic feet of cargo space inside the high-roof, extended-wheelbase configuration. E-Transit comes with an eight-year, 100,000-mile (160,000km) electric vehicle component warranty. It has a maximum payload of 3,880lbs, or 4,428lbs on the cutaway version.

2022 Ford E-Series 350-450 Cutaway
The E-series has added a few new features for 2022, such as a rear-view video camera kit. Flex Fuel Capability has also been added. A speed limitation feature is now available and the economy version of the 7.3L, V8 is available in the E450 chassis. The E-series is only available as a cutaway and or stripped chassis. Single and dual-rear wheel chassis have GCWRs ranging from 13,000lbs to 22,000lbs.

Meanwhile, the 2022 Ford Transit Connect is a carry-over year for Transit Connect. It continues to be offered as cargo or passenger equipped wagon. It has a maximum payload of 1,610lbs and a max towing capacity of 2,000lbs.

For 2022, the ProMaster is a carry over. However, the 2023 model has already been shown, and is expected late this year. It will carry a host of updates and upgrades. ProMaster is available as a cargo van, window van, chassis cab and cutaway model. It is a front-wheel-drive platform. It has a max payload of 4,680lbs and towing capacity of 6,800lbs.

General Motors BrightDrop
GM Canada’s CAMI Assembly plant in Ingersoll Ontario has been retooled to produce the BrightDrop. This is a fully electric commercial delivery van. When BrightDrop’s Zevo 600 production begins in Q4 2022, CAMI will become Canada’s first full-scale EV plant. The BrightDrop Zevo 400, (a smaller version of the electric Zevo 600) will also be built at CAMI beginning in 2023. BrightDrop currently has more than 25,000 production reservations for its electric delivery vans. The Zevo 600 promises 350km of range and the all-wheel drive motor makes 300hp and 390lbs-ft of torque. It’s GVWR is 10,000lbs.

Search
EVENTS
You cannot print contents of this website.