The proliferation of electrified options in today’s automotive market is giving fleet managers more choice than ever – and introducing more factors to consider in making those selections. Between fuel efficiency, all-wheel drive capability and price range, it’s easier than ever to customize fleets to best meet the tailored needs of both drivers and owners. Here’s a closer look at eight of the best mid-size options for fleets on the market in Canada today, from city-friendly runabouts to highway haulers and everything in between. 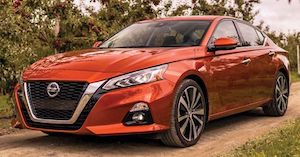 mainstream sedans, then the Nissan Altima is worthy of attention. Equipped with standard all-wheel drive in Canada, the Altima uses its 2.5-litre four-cylinder engine to power all four wheels with 182hp and 178lbs-ft of torque while still achieving a fuel efficiency of 9.4 litres per 100km in the city and 6.7 on the highway. With a starting price of $29,498 in the entry-level SE grade, the Altima offers a cost-effective way to add mid-size vehicles with all-wheel drive to Canadian fleets. 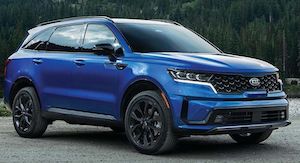 of the most affordable ways to get into a mid-size three-row SUV with a starting price of $33,995. Two engines are offered, each a 2.5-litre four-cylinder; the entry-level version makes 191hp and 181lbs-ft of torque while using 10.1 litres per 100km in city driving and 9.2 on the highway, while the upgraded turbocharged engine generates 281hp and 311lbs-ft while consuming 11.1 and 8.4 litres respectively. An all-wheel drive version of the hybrid Sorento is expected to go on sale in Canada late in 2021. 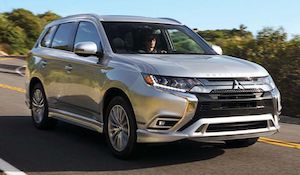 of $44,198, it qualifies for partial incentives from both the federal iZEV program and existing provincial EV rebate programs. Its 2.4-litre four-cylinder engine combines with twin electric motors to generate a total system output of 221hp while using a combined average of 3.2 litres-equivalent per 100km and offering an electric-only range of 39km. All-wheel drive is standard, plus this is one of the few plug-in hybrids that works at a Level 3 charger for quick battery top-ups on the go, and it’s offered with a 10-year, 160,000km limited powertrain and battery warranty. 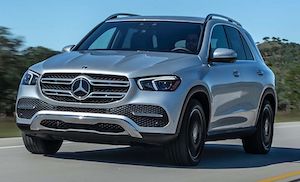 size SUV that come as either a simplified entry model or a to-the-nines grade. The latter is the GLE 350 and is a suitably premium vehicle, priced from $69,900 and fitted with a 2.0-litre turbocharged four-cylinder engine that produces 255hp and 273lbs-ft of torque while burning 12.4 litres per 100km in city driving and 9.0 on the highway. The GLE 450, priced from $77,500, upgrades the engine to a 3.0-litre turbocharged inline-six-cylinder engine fitted with the EQ Boost mild hybrid system, which makes 362hp and 369lbs-ft while consuming 11.4 litres per 100km and 9.2 on the highway.

Subaru Outback
There’s nothing else on the market quite like the Subaru Outback. Its dimensions give it a feel 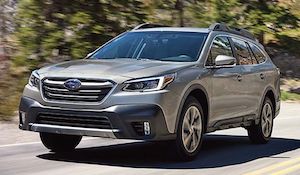 that’s an ideal compromise between a wagon and an SUV, and standard all-wheel drive, 22cm of ground clearance, and off-road chops make it a great choice for more rugged applications. Starting from $31,195, the Outback is offered with two engine options. The entry-level engine, a 2.5-litre with four horizontally opposed cylinders, makes 182hp and 176lbs-ft of torque and averages 9.0 litres per 100km in city driving and 7.1 on the highway. The upgraded engine is a 2.4-litre turbocharged horizontally opposed four-cylinder that’s good for 260hp and 277lbs-ft of torque, and it averages 10.1 and 7.9 litres per 100km respectively in the top two grades.

Ford Mustang Mach-e
An EV’s efficiency depends heavily on its weight, which is why there aren’t yet a lot of 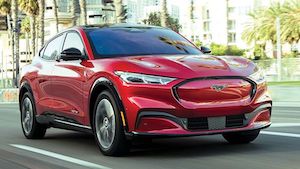 reasonably priced battery electric vehicles much larger than subcompact. Ford has therefore filled a market gap with its new Mustang Mach-e, which with an overall length of 4,724mm falls firmly into mid-size territory. Although it doesn’t qualify for the federal government’s iZEV rebates with a starting price of $50,495, it does qualify for rebates in Quebec and BC in its lower-priced configurations. Offered with both standard and extended range batteries and in rear- or electric all-wheel drive, and a maximum range in the latter of 435km, the Mustang Mach-e hits the market ready to electrify a variety of applications.

Toyota Venza
Toyota’s mid-size Venza returns to the company’s line-up after a four-year hiatus, and this time

it comes equipped with standard hybrid drive. Not only does this mean that hybrid fuel efficiency is available at every price point, including in the base model priced at $38,490, but electric all-wheel drive is also standard equipment since the electric motor powers the rear axle. Combined with the Venza’s 2.5-litre four-cylinder engine, it has a total system output of 219hp while averaging 5.9 litres per 100km in city driving and 6.4 on the highway, figures that are remarkably low for any SUV of this size that doesn’t require a plug.

Hyundai Sonata
If what you really need is wheels and you can take ground clearance, all-wheel drive and

cargo capacity out of the equation, don’t let the market’s heavy lean toward SUVs distract you from the humble mid-size sedan. The Hyundai Sonata comes in both gas-powered and conventional hybrid configurations, and its dramatic styling and unique lighting treatment ensure it comes across as anything but boring. In the gas version (from $27,149), two engine options are offered with the entry-level 2.5-litre four-cylinder producing 191hp and 181lbs-ft of torque while consuming 8.8 litres of fuel per 100km in city driving and 6.4 litres on the highway. Opt for the hybrid (from $40,199) and those figures drop to 5.3 and 4.6 respectively from its 2.0-litre four-cylinder engine and electric motor with a combined system output of 192hp and 271lbs-ft.

In with the new