From the October 2022 print edition

Not so long ago, a special edition vehicle trim was an immediate tell. It meant a next-generation redesign was imminent, so the manufacturer was throwing the best of its parts bin at a bargain-priced version to get as many units as possible out the door. 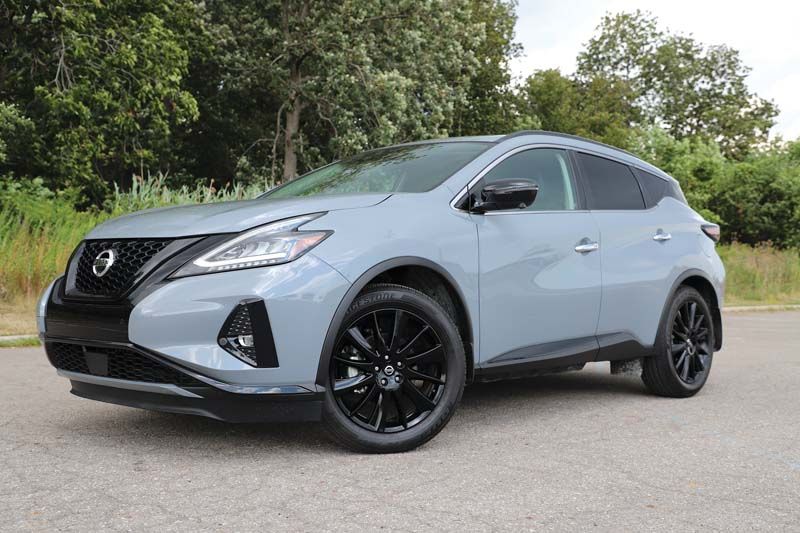 Today, things are not so certain. Take the 2022 Nissan Murano Midnight Edition as a perfect example. It definitely doesn’t herald a redesign for 2023; next year’s model is already listed on the Nissan Canada website as a carryover. The upcoming Nissan Ariya EV is a mid-size crossover, just like the Murano,
so this special edition could be part of a multi-year lead-up to the Murano being discontinued entirely.

Or maybe Nissan is just jumping on the blackout package trend and this all much ado about nothing.
Regardless, given that the Murano was last redesigned for the 2015 model year, a light spruce-up doesn’t hurt. The Midnight Edition is based on the SL trim, which slots in just below the top-of-the-line Platinum, and adds on 20-inch blackout wheels, a blacked-out V-Motion grille, black-capped outside mirrors, and other dark exterior accents.

Interior styling
The Murano’s exterior styling has held up well over the years. The cinched floating roof design in particular is one of the nicest rear quarter window designs of the last decade. Its interior, on the other hand, is showing its age. There’s a lot of black plastic, especially on the dashboard just in front of the first-row passenger, while modern designs tend to be more creative with colour and materials. The driver reads a manual speedometer, the low-resolution 8-inch touchscreen and wired access to Apple CarPlay and Android Auto are behind the times, and climate controls turn and click instead of bouncing and buzzing. That said, everything is predictable in its layout and function, which serves many drivers just fine.

This generation of Murano was one of the first Nissan vehicles to feature the brand’s zero-gravity seats, and they hold up today as some of the most comfortable around for longer drives, which we confirmed over 800kms of highway driving. However, the heated seat function, which is standard on the front seats and available on the outboard rears, could be more powerful and is inconsistent in its delivery. Ventilated front seats are not available in the Midnight Edition but are offered in the Platinum grade, along with semi-aniline leather upholstery and NissanConnect services.

Under the hood, a 3.5L normally aspirated V6 produces 260hp and 240lbs-ft of torque that peaks at 4,400rpm. In combination with the continuously variable transmission, which has a D-step function to simulate the shifts of a traditional automatic, acceleration and throttle response don’t call much attention to themselves. This is a good thing in a vehicle intended for getting from A to B without hassle. Steering feels heavier and more substantial than what is common in newer competition. In Canada, all-wheel drive is standard. This is a self-engaging system and there are no manual override or drive modes available.

Fuel consumption
Fuel consumption is acceptable for a vehicle with a gas-only powertrain at 12.0L per 100kms in city driving, 8.5 on the highway, and 10.4 combined as rated by Natural Resources Canada. Our test netted a real-world result of 8.7L/100 km in mostly highway driving.

However, higher fuel bills have become the Murano’s Achilles heel as electrified competition has appeared around it. The Toyota Venza now comes with a hybrid powertrain as standard equipment, while the Hyundai Santa Fe offers both conventional and plug-in hybrid options. The Murano’s primary gas-only competition, the Ford Edge, is about to be discontinued. There are other mid-size SUVs on the market like the Kia Sorento and the Mazda CX-9, but those have a standard third row, which eats into available cargo space. If the extra seating isn’t required, the second-row spaciousness and 908 litres of space at the back of the Murano might be of greater benefit. It’s also worth noting that the Murano took top spot in the 2022 JD Power Initial Quality Study.

The 2022 Nissan Murano remains, classically and unapologetically, an attractive and functional gas-powered mid-size two-row SUV – one of what appears to be a dying breed. If this package is what you’re after, get it while you can.