Imagine decreasing workload and production costs, increasing operating efficiencies and, most important, easing that agonizing pain of first-mile, last-mile delivery speed bumps. The evolution of drone technology and the sophistication for these unmanned aerial devices is extraordinary. The military has used and deployed drones for decades, consumers have mastered navigating and controlling them—in fact, a 16-year-old Toronto teenager was recently recognized as the youngest Canadian to achieve a drone pilot certificate. 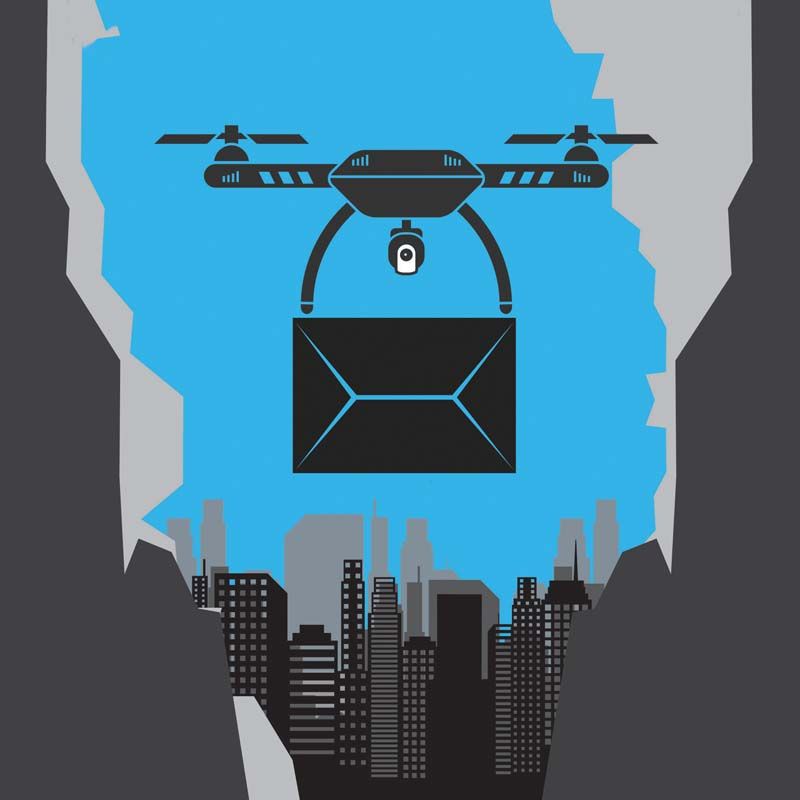 Drones are now moving, at an accelerated pace, into cargo delivery. Globally, there is lots of activity with drone cargo delivery technology. Airlines in Africa, Asia and Europe are getting into the drone cargo business for an unmanned alternative. The US has 377,000 drones registered with the Federal Aviation Administration (FAA). Europe-based Dronamics’ Black Swan, its flagship unmanned cargo drone, can carry 350kg of cargo up to 2,400km at an 80 per cent lower cost than aircraft. It has said that it will have subsidiaries in Canada, Ireland and Australia.

Last November, Air Canada announced it could soon operate unmanned drones for logistics intermediary shippers and third-party logistics. Jaunt Air Mobility will be designing and manufacturing its family of eVTOL aircraft in Montreal.

A first in Canada, InDro Robotics Inc. achieved the Canadian Transport Agency’s (CTA) approval to operate domestic air service for cargo drone delivery. This license means it can ship up to 10kg.

The push for battery electric vehicles (BEVs) and autonomous ground vehicles is also paving the way for drones. “Between autonomous ground and air delivery vehicles, there are similarities,” says Barrie Kirk, executive director of the Canadian Automated Vehicles Centre of Excellence (CAVCOE). “The kinds of LiDARs (light detection and ranging sensors) that are used on drones are the same basic concept for autonomous ground mobility. On the ground there are a lot of targets to track that are moving slowly, whereas in the air, there are fewer things to track, but the drone is moving quickly.”

Kirk says there are various market segments, including Amazon, doing pilots and research for using drones for first-mile, last-mile delivery. “But there’s also a lot of activity in ground-based robots.”
UPS has been conducting pilots that use a delivery van that drives to a location, the roof slides open and a drone lifts off with a parcel. Once delivered, the drone returns to the van, even if the van has moved to a different location, says Kirk.

The real driver in this technology, according to Mark Aruja, director of Unmanned Systems Canada, is the small and powerful electric motors, along with the evolution of battery technology and digital technologies. “[They use] accelerometers that came from airbags deployed in cars, the cameras on them came from cell phones,” he says. “People look at these little helicopter drones and think it’s low tech, but actually what’s in there is more sophisticated than aircraft that fly people.”

Aruja says that the pandemic has accelerated drone cargo delivery technology and it’s driven by e-commerce. Consumers are impatient and the demand for same-day or next-day delivery has never been greater.

Kirk agrees. “There are certainly a lot more parcels being delivered now compared to pre-COVID times,” he says. “That is a big driver. But there’s also a desire to improve delivery to remote communities and indigenous communities. Improved delivery of parcels and medical supplies to remote communities helps improve the quality of life. And certainly, the cost is lower by drone than if you had someone actually flying the plane.”

Turnkey solution
Drone Delivery Canada, a Canadian success story, has been in business for seven years. “All
of the intellectual property patents are ours,” says Michael Zahra, president and CEO of the company. “I hesitate to call us a drone company because we don’t just sell a piece of hardware or software. It’s a turnkey infrastructure solution for logistics applications that’s sold as a managed service that includes consulting, set up, implementation and the ongoing management of the solution.”

Drone Delivery has three drones in its fleet—the Sparrow and Robin XL, which are electric units, and the Condor, which is a larger helicopter style gasoline powered drone. The fleet offers ranges of 30km to 200km carrying payloads of 4.5kg to 180kg.

“The Sparrow has been operating for more than four years now. The Robin XL and Condor are in testing and are expected in the near future,” says Zahra. “We’ve done a number of pilot projects – we’ve flown in the US with the FAA and we’ve flown at Moose Cree First Nation. We’ve also had First Nations pandemic projects with Georgina Island and Beausoleil First Nations.”

Using the Sparrow, Zahra says they were able to fly to Georgina Island and the Beausoleil First Nations in Northern Ontario with the aim to deliver supplies, PPE, food and hygiene kits. “These are island communities that wanted to self-isolate and limit person-to-person contact, but they wanted to keep the supply chain open.”

Drone Delivery has run two commercial pilot projects with DSV, a global logistics company. DSV’s 1.2-million-sq-ft facility in Milton, Ontario, used the Sparrow to move cargo externally around its campus, which is more efficient than trying to navigate the facility. It also ran a project moving healthcare related items offsite to a DSV customer.

“We’ve done three projects with Ontario’s Peel Region, where we were moving defibrillators (AEDs) for simulated cardiac arrest needs in the field,” says Zahra. “If you’re in a rural area, it could take 20 minutes before an ambulance can arrive. We can get it to you by drone in a few minutes and potentially save lives. We’ve done three projects with Peel, involving Toronto-based Sunnybrook Hospital.”

With the University of Saskatchewan, Drone Delivery tested moving blood equivalent samples. “They wanted to test the ability of temperature control cargo. We can do temperature control, passive or active, with all three of our drones. And we can ship vaccines, if needed.”

Aruja says, “Just over a year ago, the Canadian Advanced Air Mobility Consortium formed, which is driving advocacy on the west coast. They’re really working from what they call the triple bottom line. This technology is being adopted because we’ve been successful in gaining social license to use it. From an investment perspective, you need to understand the social rational. It’s not by coincidence that the first trials of this technology are with blood plasma or organ transplant delivery or COVID testing. That’s by design to make sure that socially responsible things are happening.”

The biggest challenge for many countries is regulatory. Kirk says that it’s illegal to fly drones over people. “There are certainly liability issues. But cars have been around for over 100 years and sadly there are still collisions and deaths. As drones become more popular the public and the government need to understand that the technology will never be perfect. The government and Transport Canada need to communicate that any kind of automated technology, ground or air, will never be perfect. It will be safer than human driven, but never perfect.”

Canada is ahead of the game in regulation. Last fall, Transport Canada added what it’s calling Advanced Air Mobility on its regulatory roadmap. “It’s in the plan and that’s big time,” says Aruja. “If you’re an investor, that’s a measurable risk reduction statement.”

Aruja says there is a reason why Canada Post is interested. It has a mandate to deliver to every Canadian address, which has some geographically difficult locations. “It really started to accelerate during the pandemic, but it’s no surprise that pre-pandemic London Drugs was testing the technology. And there’s a whole infrastructure piece that comes with it. It involves not only customers but also municipalities, which are starting to embrace it and understand how you might rethink cities of the future.”

While Drone Delivery Canada can drop parcels in remote locations based on GPS for emergency situations, its preferred model is having designated depots (DroneSpots) where there are security cameras, a weather station, barcode scanning and access control. “Real estate developers, who are developing homes, condos and shopping plazas have reached out to us regarding integrating such depots into future developments,” says Zahra. “First mile, last mile are major pain points for couriers. That last mile could be more than 60 per cent of the cost. If you look at e-commerce specifically, the market is saying 13 per cent of e-commerce deliveries could be by drone by 2025. Even if you ignore health care and other applications and just look at e-commerce, the drone delivery market could go up to 40 per cent by 2030.”

“The only reason drones exist in the marketplace today is because they’re cheaper to get the job done, as well or better than the traditional way of doing business,” says Aruja. “I had a meeting with Airbus, one of the largest producers of helicopters. They showed the cost benefits of potentially going to this autonomous air taxi. These are people who understand the numbers better than anyone in the world because they own the numbers. It was staggering.”

There are many big hitters from the aerospace industry getting into the autonomous air mobility game. A quick Google search will provide an overwhelming number of projects and game-changing technology. Aruja advises understanding where the costs and opportunities are. “The regulatory uncertainty continues to be reduced on an ongoing basis. It’s happening quicker than you think. If you want to preserve your competitive position, this is something you need to be aware of.”