From the February 2019 print edition

From a design standpoint, cargo vans may not be the most exciting four-wheelers on the road, but they’re big business—just ask Mercedes-Benz. It received a 20,000-unit order from Amazon for its new 2019 Sprinter. With the online world in a booming state, it’s no wonder the German luxury brand has put plenty of resources into remodelling its commercial van for a third-generation, and its first since 2006. 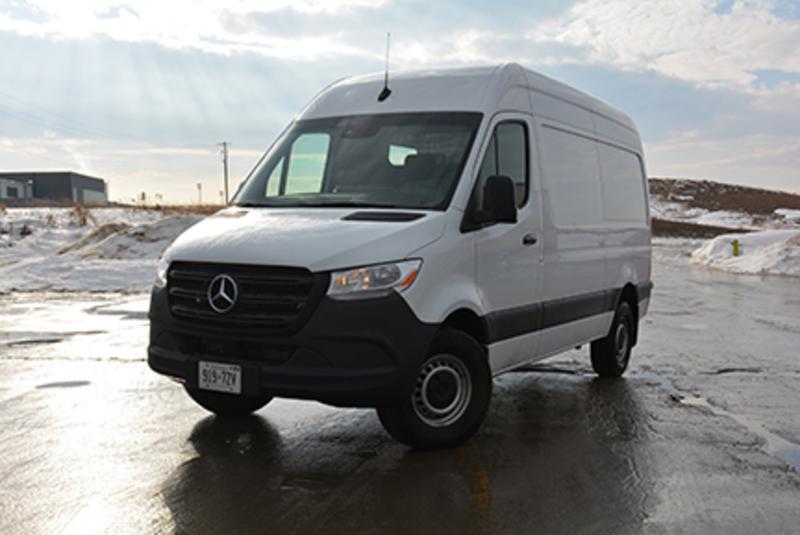 For this test, I was provided an Arctic white 2019 Sprinter 2500 cargo van with the standard 144-inch wheelbase (it can be had at 170-inch as well). There’s also a new edition to the roster, the 1500 base size to go along with the 3500 and 4500, available in cargo, crew, passenger and cab chassis form. Regardless of configuration, style doesn’t change much on the outside. How much can really be done to a supersized box anyway?

Nevertheless, the Sprinter’s grille and headlights take on a sleeker form that falls in line with the rest of its lineup. There’s also still something to be said for its three-pointed star logo, representing a status and level of commitment for that particular business.

A technological marvel
Inside, is where the transformation from a simple to sophisticated commercial mover takes place. Mercedes-Benz has taken technologies implemented in its top-shelf cars like the E-Class and S-Class, and placed them into this spacious cargo box at a starting price of $42,900.

The most noticeable addition comes in the form of its all-new Mercedes-Benz User Experience (MBUX), an infotainment unit that sits in the centre of its comfy three-seater front row featuring four cup holders. My tester came in the seven-inch variety under the Premium package ($1,640), which can be upgraded to a stunning 10.25-inch screen.

The new system is a high-definition, intuitive and responsive operation that specializes in voice commands for climate control, radio, or navigation, simply by saying, “Hey Mercedes.” I asked to find the closest diesel station, and it provided a list of locations. After quickly choosing one, I instructed MBUX to direct me to it via its navigation system. By 2020, Canadians will receive the full suite of MBUX capabilities that will include Mercedes Pro Connect, a fleet management system with vehicle tracking capabilities that’s also able to look at specifics such as tire pressure.

An attention to safety is paramount within the aforementioned Premium package and Driver Convenience Package ($1,430). These packages provide: Blind Spot Assist, Attention Assist and Cruise Control for the latter, and Active Braking Assist, Active Lane Keep Assist, and a rearview camera in the infotainment display from the former. If you want to go full-on gadgetry, get the Premium Plus Package ($3,080) for that 10.25-inch screen, Traffic Sign Assist, Parking package with 360-degree camera, wireless charging, and a distance regulator Distronic plus.

Solid, smooth drive
Technology places the Sprinter at the forefront of van offerings but having various powertrain options adds versatility to the mix. The 2500 was fitted with the top-tier 3.0L V6 turbo-diesel (a 2.0L four-cylinder gas engine is standard) rated at 188hp and 324lbs-ft of torque that’s mated to a seven-speed automatic transmission. There’s a 4×4 version for additional costs, but this one was the 4×2 rear-wheel setup with a max payload of 1,870kg (4,123lbs).
Diesel doesn’t make for the quietest of drives, but the Sprinter is smooth compared to most cargo vans that have you bobbing in your seat. The Sprinter is anything but bumpy, creating a relaxing SUV ride feel even with cargo in the back. My week of testing landed in the middle of a snowstorm, and to my amazement, road and wind noise were simply faint sounds in the background.

You may have to hold the engine start button for a whole two seconds before it fires up, but once it does, the 66 lb-ft of extra torque in the diesel is felt off the line. It sends the large transporter off with some gusto and eventually into a nice groove at highway speeds. Cornering is puzzlingly precise with a smooth turning radius; just make sure to check all your mirrors to confirm full clearance.

The one thing I could do without is its skinny gear shift lever. It may work on the C- or E-Class but doesn’t suit the bulk that is the Sprinter. It’s a bit of a disconnect, much like the old-style control panel next to the futuristic MBUX unit. Luckily, that control panel can be swapped out for a modern instrument cluster with colour display in the Premium Plus package.

With diesel and gas powertrain options, a total of 48 different base models to choose from including high roofs and extended versions, and 1700 configurations worldwide (there’s no number for Canada) that maximizes cargo volume at 15,000 litres—there’s clearly a 2019 Mercedes-Benz Sprinter for every need.

The Sprinter also separates from the pack by being technologically sound and more prepared for a connected and fleet efficient future. This is all achieved while getting you to your destination in a smooth and safe driving manner with ample payload and towing ratings. For a company’s peace of mind, all the above would seem to indicate, a winning formula.

The cost of evasion—can you afford not to invest in driver training?

Hauling into the New Year