Good news overall for Canadian supply chain professionals: it appears that average salaries in the field have seen a rise in 2019. Not only that, but every region of the country has gotten an increase in the average salary since the previous year—with British Columbia receiving the largest jump. 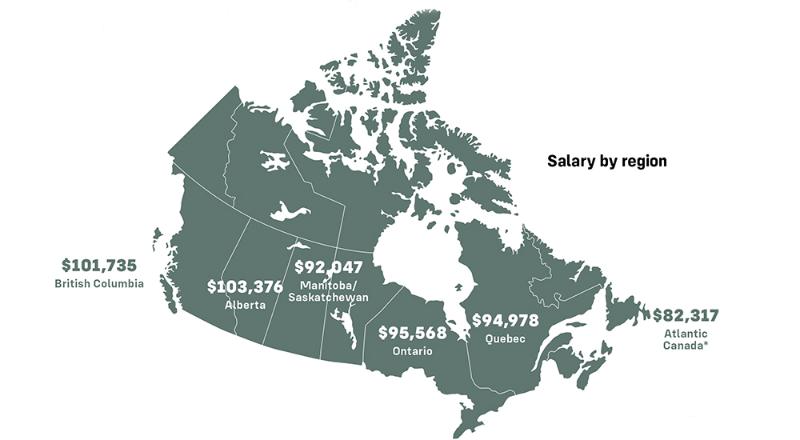 These are a few of the highlights from the 2019 Annual Survey of the Canadian Supply Chain Professional. Each year, Supply Professional magazine surveys readers about work-related topics including salary, job satisfaction, employment situation and organizational influence, along with challenges and trends in the field. This year, we’ve partnered with Supply Chain Canada for a more comprehensive look at the state of the field.

Gender gap
The gap between the reported earnings of male and female respondents closed slightly this year. Since Supply Professional began performing the survey, a consistent result has been that women report making less than their male counterparts. In 2018, female supply chain professionals reported that they earned about $12,000 less per year than males. This year, men said they earned $100,605 while women took home $91,429 for a gap of $9,176 or 9 per cent. 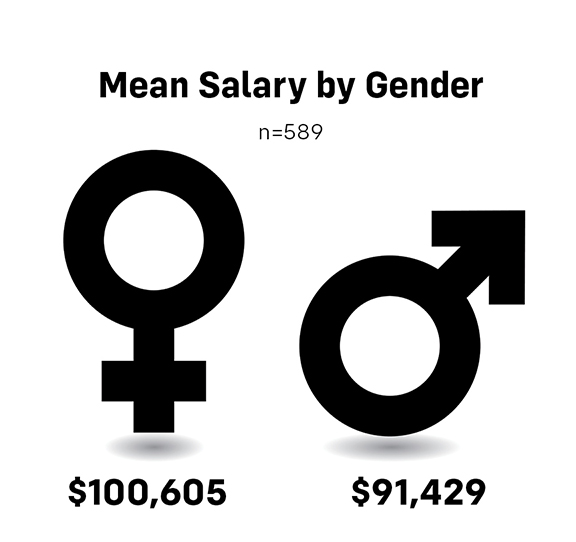 Salary by position
As is the case each year, a person’s position within an organization affects their salary. Not surprisingly, those at the executive level have the most earning power. Supply chain professionals at the executive level had an average salary of $140,715, up from last year’s reported average of $119,770. Next up is managerial professionals, who earn $108,537. Consultants took home an average of $104,664, a 22-per cent increase over the $80,697 they reported in 2018.

Another factor affecting earning potential is education, with a higher education level generally translating into higher earnings. Also, every age range with an adequate sample size saw their earnings increase this year. Those with a trade/technical diploma earned $87,273, up from last year’s $76,410. A college diploma meant an average salary of $94,961, while those with a bachelor’s degree saw a salary of $96,821. At $108,811, those with an MBA degree took home the most. Supply chain professionals with a university degree of any kind had an average salary of $98,183.

Size matters
The type of organization a respondent works at, along with its revenue and the number of employees, also affects how much supply chain professionals earn. Those working in the oil and gas extraction field earned the most this year, with an average salary of $121,270. Those in the natural resources sector took home $108,693. The trade/wholesale sector earned $98,011 while those in public administration and manufacturing reported average salaries of $94,461 and $94,165, respectively. Those in the service industry earned $92,632 while the construction sector saw an average salary of $88,562. That’s followed by educational services at $87,130. 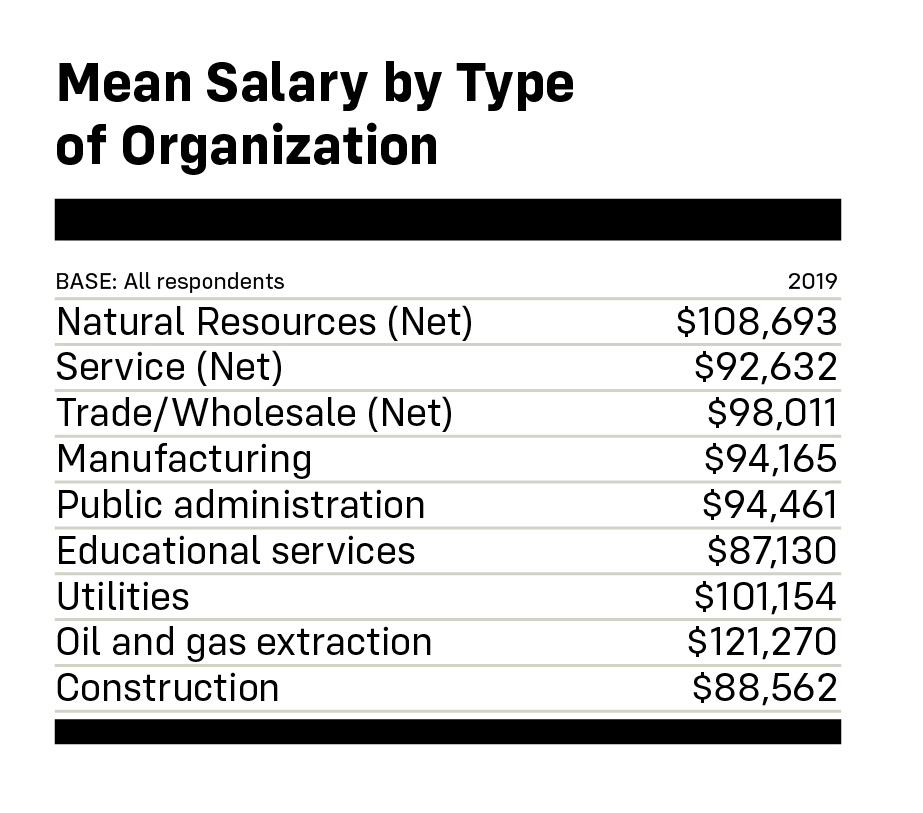 The typical respondent
This year, the average respondent is 45.8 years old—slightly younger compared to last year’s average age of 49.7—and works an average of 42 hours a week. They have 18 years of experience in supply chain and 8.4 years at their current companies. They have also been in their job an average of 5.8 years.
When it comes to job functions (respondents checked all that applied) 90 per cent said they worked in purchasing/procurement while 72 per cent said supply chain management. A total of 69 responded with vendor management, while 69 said strategic sourcing. Overall, 39 per cent work management positions, 32 per cent have a strategic position and 26 per cent are in operations/tactical. They each supervised five people. Fifty-six per cent of respondents were male, while 41 per cent were female 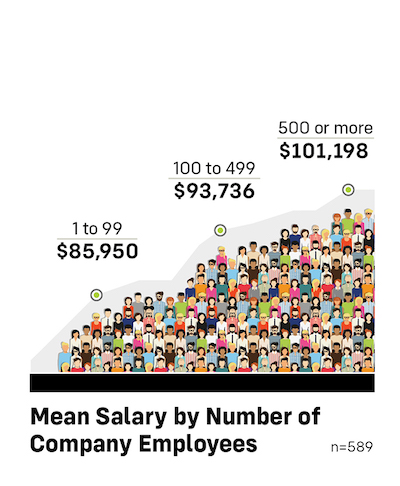 Along with their satisfaction regarding salary, the survey asked whether respondents felt their compensation level has kept up with their job responsibilities. Overall, 65 per cent agreed they had, with 20 per cent of those strongly agreeing. Thirty-one per cent disagreed and 9 per cent strongly disagreed.
Across 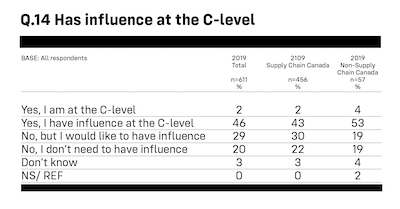 As with previous years, the survey asked what the top supply chain issue respondents anticipated facing 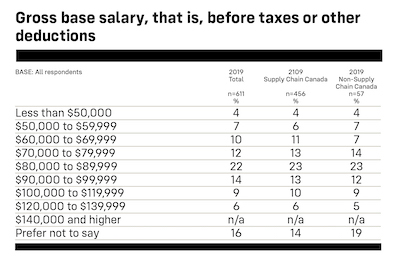 over the next 12 months. Cost control usually ranks as the top concern, with this year no exception. Overall, 25 per cent of respondents answered cost control as the main issue, with staffing issues second at 8 per cent. Risk management, capacity shortages, technology upgrades and reorganization each garnered 6 per cent while lack of internal support was the main issue for 5 per cent of respondents.
Through reaching out to Supply Professional readers and Supply Chain Canada members across the country, we surveyed 611 supply chain professionals. That provides a margin of error of plus or minus 4 per cent, 19 times out of 20. The survey was fielded online from June 4 to July 5, 2019.

The 2019 Annual Survey of the Canadian Supply Chain Professional is brought to you in partnership with:

Supply Chain Canada™ is the voice of Canada’s supply chain, representing and serving more than 7,000 professionals across the country, as well as the wider supply chain community. It is a federation, with a national secretariat and 10 provincial/territorial Institutes. Its mission is to “provide leadership to the Canadian supply chain community, provide value to all members, and advance the profession.” Through its education, advocacy and resource-development initiatives, the association endeavours to advance its vision, to see that “Canadian supply chain professionals and organizations are recognized for leading innovation, global competitiveness and driving economic growth.” The association’s Supply Chain Management Professional™ (SCMP™) designation is Canada’s most-sought-after professional designation for those entering the field and advancing as leaders in supply chain.
www.supplychaincanada.com