From the October 2022 print edition

Many of the features traditionally associated with smart facilities – lighting activated by proximity sensors, zone temperature control, comprehensive reporting on consumption, solar energy systems – are all about reducing carbon footprint and its associated costs. That scope is expanding as a growing number of companies deploy smart building technology to help improve their operations. 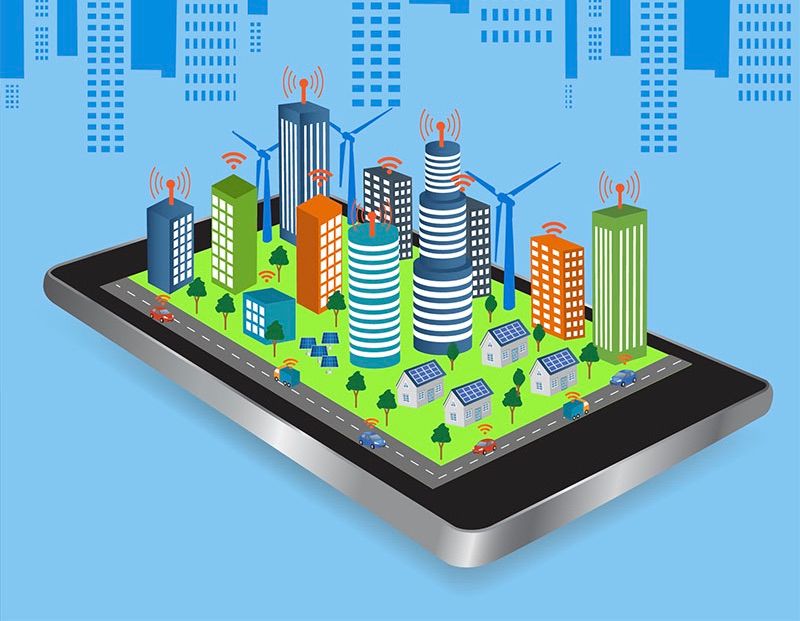 “For us, smart facilities are not just about energy consumption – they are also about enabling efficiency through optimization,” says Khadem Alam, director of engineering, DSV Solutions Canada. “This means delivering benefits like less labour use and fewer operating hours to get the same volume and output.”
Today’s smart facilities are no longer just about automated systems, but also information gathering to help improve the operations within the facility. “What we’re looking at from a smart warehouse perspective is ‘how do we augment our operators in a way that gives them visibility to more information than they had before?’” says Kristi Montgomery, Vice President, Innovation, Research & Development, at Chattanooga-based 3PL Kenco, “and then taking that data that’s being collected by smart devices and using it to provide real-time decision making in the warehouse.”

Ensuring a safe work environment is an important example. “We’re doing a lot of things around safety and ergonomics with data visibility within the four walls of the warehouse,” says Montgomery.
Protecting temperature-sensitive product is another. “If we’re in a temperature-controlled warehouse,” says Montgomery, “we need to take extra measures to ensure that the air conditioning systems are properly maintained and not about to fail.”

For warehouse operators, the smart facility can also provide visibility into key supply chain challenges and opportunities. “We consider our facilities smart when we can provide not just data, but analytic information that our customers need to make informed decisions about their supply chains,” says Alam.

One of the keys is capturing data at a much more granular level than was possible previously. “What you’re doing is understanding the behaviour of the environment, not just at an overall level, but at an individual personal or worker level,” says John Boktor, senior manager, digital construction at PCL Constructors Inc. “Whether it’s with cameras or sensors, you’re creating that very granular understanding of the environment.”

The trend applies to office as well as industrial environments – monitoring can include water metering at a tap level, or even detecting how many people are occupying seats in a meeting room. “Whether our customers are building a warehouse, hospital, or office space, they are asking for that granularity today,” says Boktor, “because if they’re trying to minimize their usage of energy or water, that’s what it really comes down to.”

Building core networks
As smart facilities become the new normal, architects, engineers, and contractors are adjusting to a new way of building. Essentially, a core data network capable of supporting smart technology for the foreseeable future must be built into the facility.

“Manufacturers like Cisco and IBM were pushing the intelligent building agenda, and that has since morphed into the internet of things,” says Robert Barnes, senior vice-president, energy and digital services, EllisDon. “What we’re seeing is that the amount of technology that’s being deployed within these buildings is increasing at an exponential rate.” Part of the transition is that building information systems have evolved from proprietary environmental control systems, provided by vendors such as Johnson Controls and Honeywell, to open IT systems, which in turn open the door to a variety of software solutions.

“In the past three to five years, we’ve seen proprietary programs become no longer proprietary but more open source to allow for different systems to speak to each other easily,” says Boktor.

Consequently, the core network in a facility has evolved from control system to IT network. “Smart buildings are very software focused,” says Boktor. “Our clients and developers are demanding that they see all the data they are able to capture so they can analyze and really understand it. So, you need to have a very good understanding of their objectives so you can make sure to have the proper hardware and software infrastructure in place.”

The transition means that general contractors are responsible for building data networks, suggesting that they should be consulted on the design and planning of those networks. “What people don’t recognize is that that converged network becomes the basis that all our building systems hang off of,” says Barnes. “Without that core network, I can’t commission a security system, or a building automation system.
So, the secret sauce for EllisDon is that we’ve become experts in how to deploy the technology within a live construction project.”

Providing protected environments for network equipment is an important aspect of this. “If you’re putting in a $100,000 network switch, you’re not going to put that on temporary power,” says Barnes. “It has to be in a room that’s dust free, temperature controlled, and you need permanent power from redundant sources.” Some tech innovations are making smart facilities more cost-effective to build. One is power over ethernet (POE), where network cabling provides not only data connectivity, but electrical power for devices such as fans and security card readers, reducing the cost of electrical wiring.

Another is Wi-Fi routers equipped with GPS, which eliminate the need for installing large numbers of GPS sensors. “GPS was very cost prohibitive for warehouses that are a 1.5 million square feet,” says Trever Ehrlich, creative solutions manager, innovation labs at Kenco, “but the newest models of Wi-Fi routers have GPS built into Wi-Fi access points. Of course, you need the devices to communicate with that in the right language, but once that infrastructure is in place, you can do a great deal, such as mapping where there’s congestion, or where incidents are occurring.”

Finding ways to utilize the available information, however, will likely be the biggest challenge going forward. “The intelligent network infrastructure that we deploy provides a tremendous amount of information” says Barnes, “and now tools are becoming available to leverage that information. But at the end of the day, someone has to do something with that data, and that’s where I think the gap is
in industry today.”