From the August 2021 print edition

At last, the compact SUV segment has competition in conventional hybrid powertrains. The newest entry is the Ford Escape Hybrid, which returns as part of the 2020 model’s redesign after spending a generation on hiatus. Generally speaking, hybrids have come a long way since the expensive and uninspiring offerings of just a few years ago. That said, pitting this new Escape Hybrid against its closest rival, the Toyota RAV4 Hybrid, generates a compelling discussion. 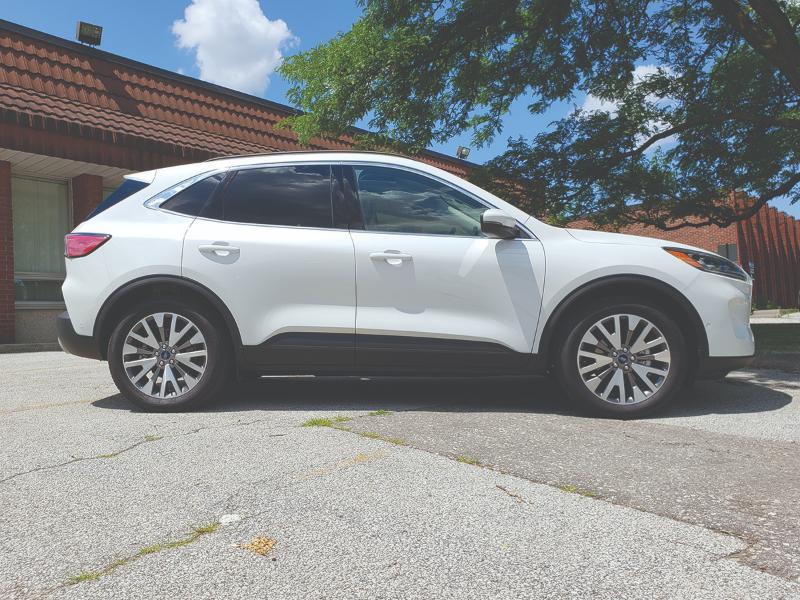 On paper, the Escape Hybrid’s powertrain is very similar: it offers a 2.5L four-cylinder internal combustion engine, which on its own generates 155lbs-ft of torque from 4,500rpm and combines with an 88kW electric motor for a combined total system output of 200hp. These figures are slightly lower than in the RAV4, but so are the fuel efficiency numbers. The Escape Hybrid promises 5.4L per 100km in city driving, 6.2 on the highway, and 5.8 combined according to Natural Resources Canada, in contrast to the 6.0 combined rating in the RAV4. This writer’s real-world reading over the course of a week was a slightly higher at 6.4L per 100km – still significantly better than most products in this segment.

This makes sense in a few ways, most notably in the Escape Hybrid’s slightly lower overall curb weight of 1,612kg as opposed to the RAV4’s 1,703kg – due in part to its briefcase-sized 1.4kW/hr battery – and in its slightly smaller dimensions. Although both its length and its height are lower – at 4,585mm and 1,679mm respectively, versus the RAV4’s 4,596mm and 1,702mm – the wheelbase is longer at 2,710mm versus the RAV4’s 2,690mm, which creates a planted drive feel to go with the energetic throttle response that stays in EV mode more often than not at low speeds.

The trade off is that much of that lower interior space is reflected in the Escape’s cargo capacity, which holds a total of 974L with the rear seats upright and 1,851.9L with them folded. This leaves no space to spare when a large object such as a stroller is loaded, which is not the case in the RAV4 or some other non-hybrid competition.

While the success of the exterior redesign is a matter left to taste, the interior design and build quality are less open to debate. Faux wood inserts are not uncommon in this lower-budget segment, but other manufacturers have successfully made them more visually convincing, and the notched pattern etched into the plastic door paneling draws attention to an area that it perhaps ought not. The cabin is fairly quiet apart from some road noise that transfers through the large 19-inch wheels, and it does have the added benefit of natural light through a panoramic sunroof, which is part of a $2,300 package in the Escape Hybrid but is not available in the RAV4 Hybrid at all.

Tech highlights
Technology features in the Escape are impressive. Ford’s SYNC 3 system is sometimes slow to respond shortly after start-up but is otherwise a user-friendly and functional system, and both Apple CarPlay and Android Auto are included along with on-board navigation and SiriusXM Traffic and Travel Link. The gauge cluster is a fully digital, 12.3-inch display, and a head-up display is included in the panoramic sunroof package. Heated front seats and side mirrors are included along with a heated steering wheel and wiper park, and a wireless charging pad positioned ahead of the rotary gear shifter under the HVAC controls.

For safety and convenience, Ford’s CoPilot 360 package is standard, with pre-collision assist with automatic emergency braking, a lane-keeping system, and blind spot information with cross-traffic alert and automatic high beams.

The deciding purchase factor for many, however, will be price. In the Toyota RAV4 Hybrid line-up, a slimmed-down LE trim is available at $34,321 including delivery fees. The Escape’s only conventional hybrid trim is the top-of-the-line Titanium, with a starting price of $38,649 including delivery fees and a total cost of $43,149 as tested

Value in all the right places