From the April 2019 print edition

While working in Boston a number of years ago, Quebec native Stephany Lapierre came to a realization 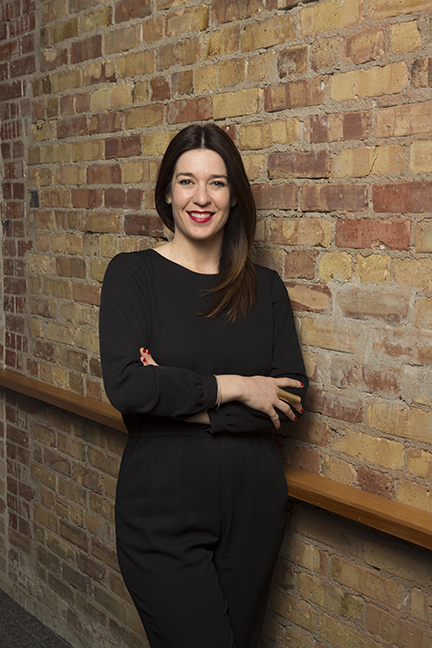 of sorts about innovation. It was in that city that Lapierre started the first of the two companies she would eventually head. She was working directly with commercial teams, mostly in the pharmaceutical space, which she noticed was highly competitive. Lapierre was constantly watching for innovation, which, perhaps ironically, she found in short supply. She spent a lot of time meeting with suppliers over coffee, looking for tidbits of innovation that she could glean from her conversations with them. About 99 per cent of the time, she notes, those efforts were a bit of a waste.

“When it came down to finding innovation, or finding things that were interesting, if I really put my mind to it, it was really hard,” she recalls.

As she talks about innovation, Lapierre sit in one of Toronto’s main innovation hubs, the MaRS Discovery District at the southeast corner of University Avenue and College Street. The not-for-profit has the goal of commercializing publicly funded medical research and other technologies, as well as supporting many of the country’s most promising technology start-ups. The tech hub is also about a 30-minute walk from Lapierre’s current company, tealbook. The company has used the kind of innovation Lapierre sought in Boston to connect buyers and suppliers faster, better and in a more trusted way.

Originally from Drummondville, about halfway between Montreal and Quebec City, Lapierre left Quebec at 18 to teach skiing in Whistler. She then attended the University of Guelph, in large part to learn English, where she completed a B. Comm in marketing management.

Lapierre worked in sales in Toronto for a Montreal-based pharmaceutical company before switching to a data company for a short time, then moved to Boston. Her experiences led her to start a strategic sourcing and procurement business there 13 years ago. The company’s goal was to help commercial teams find more of the kind of innovation she herself had sought. The company grew quickly, expanding its expertise into helping procurement teams become more efficient.

The need for speed
When a company is in a period of “hyper-growth,” savings often takes a backseat to speed, agility, scalability and frictionless processes, Lapierre says. Ramping up those attributes first often helps an organization reach their goals faster. Lapierre and the team at her company found that they excelled at helping companies do just that. With larger companies, the change management process is often heavy and slow. Smaller companies offer a clean slate, she says.

“We could actually build the function in a way that was enabling for the leadership teams to have visibility and also the business to move faster and to be more competitive.”

Lapierre’s company was finding innovation and better tools to do better RFPs, better processes and more seamless workflows where there were still legacy systems. But introducing multiple tools to solve one problem could also create data islands of supplier information across multiple systems, and often duplication in the same systems. This could impair the leadership team’s ability to make informed, strategic decisions due to a lack of access to good data. As well, employees had to find information through Google, calling friends or other less-efficient means. This introduced new suppliers, often unnecessarily, along with the risk that comes with this. This all burdens the legal and finance departments while creating data duplication, she says.

At first, and although she saw these inefficiencies clearly, Lapierre fought the urge to take on trying to help fix the situation. By this time, she was mother to three daughters and was running a successful consulting business. But after eight years of seeing the same inefficiencies repeated, seeing supply chain and procurement starved for change and innovation, she decided to start tealbook, the company of which she’s currently founder and CEO.

The company offers a cloud-based solution, called Enrich, that incorporates machine learning to unify data across companies from around the world into one profile per company. Currently, tealbook provides a database of 1.2 million suppliers globally, with the goal of building that to 100 million companies. But Lapierre stresses that, rather than the number of companies, what’s important is the depth of information that’s presented through tealbook. “The more (information) that we unify, the more understanding of the relationship, the goods and services, the patterns, the similarities between their customers or their suppliers or to each other, the actual network becomes much more intelligent and much more trusted,” she says.

Pest control in Portugal
tealbook has built a workflow that delivers the information in what Lapierre calls “a beautiful, easy-to-use interface that’s as easy to use as LinkedIn.” That gives a company’s leadership team visibility and a unified, horizontal view of suppliers. Information can get granular—for example, if a company is looking for, say, pest control in Portugal, suppliers appear by spend, region, certification and so on. All this information appears on users’ smartphones via an app.

It’s second solution, called Explore, that allows clients to click “find similar companies” to give them other recommended suppliers based on relevance, geography, diversity or whatever classification is needed. Organizations can then build a list of incumbents, prioritize their mandate or goals and add more competitive suppliers that are innovative, or diverse, or fit whatever requirements a company wants.

“It doesn’t replace a complex RFP but it pushes it as far as an RFP,” Lapierre says. “And the intent there is, I want to build a list, I want to put my requirements, I want to invite my team to collaborate, to add to the list, remove from the list, build the requirements together. The purpose is to invite suppliers to respond. It’s very similar to an RFI, RFQ, RFX, but it’s more agile and it’s quite flexible.”

It’s third offering, called Impact, helps organizations access supplier diversity data. Users can generate diversity spend reporting to set baselines or meet and set new corporate goals. Organizations can view existing small and diverse suppliers with a click, as well as their certifications and expiry dates.
The company has also racked up a few accolades for its efforts. In its short life, tealbook has won the Gartner 2018 Cool Vendor in Strategic Sourcing Applications. It was also inducted into the 2017 CIX Top 20. For her part, Lapierre is also one of the Supply Chain Management Association’s first ever 100 Influential Women in Supply Chain.

But such success doesn’t come without challenges. Entrepreneurs must be “super passionate” about what they’re doing, Lapierre says. As well, raising capital can be tough. For quite some time, many people didn’t understand what the company was trying to do. People would ask questions like, ‘who maintains the data?’ The answer, Lapierre says, is ‘no one.’

“Nobody sits at Google and maintains Google,” she says. “It’s the same principle. The more data we get in, the more we’re able to actually build trends and similarities and then give it back to you in a way that’s relevant.”

Lapierre has discovered that having the right people in place at a company it crucial. But she has been fortunate, she says, to find those right people. She found her chief technology officer, for example, just over two years ago. He was at Google previously and before that built social media platforms in Silicon Valley. He spent years working at companies like Ariba and IBM. “He had all the components of my vision,” she says.

But like many in supply chain and procurement, Lapierre didn’t start her career with sights set on the field. Her focus was always on solving a business problem: helping business stakeholders identify suppliers more effectively. And just as you can’t build a company without investing in talent, an organization’s supply chain and suppliers are a critical component of success, she says. How you treat them, where you find them, what type of burden you put on them—all of these factors are important. “All these things can be resolved by technology, by transparency, by speed, by efficiencies, by being more thoughtful and by having more confidence in the information,” she says.

The road ahead
The world of business, and therefore supply chain, is changing. However, Lapierre says, many companies (especially in Canada) are far behind and often lack the support from the executive teams to make changes. At the same time, some companies are doing exciting, innovative things. How can supply chain leaders attract the new talent they need to push forward with change?

“The decisions that you’re making today will impact the future talent that you’re going to bring into your organization,” Lapierre says. “to be a driver of change, to be enabling a digital transformation and giving teams the freedom to make some changes and really embrace it, will make a significant difference.”
For those newer to the field and perhaps looking for a position, Lapierre advises paying attention to the executive team’s commitment and investment in building up the supply chain function. Find out what a company’s technology roadmap is. “Ask those really important questions: what does the future look like? What’s the vision for procurement or supply chain? It’s a basic question, but it’s such an important one when you’re deciding where you’re going to end up working and the environment that you’re going to get yourself into.”

A willingness to adapt is also important. Those who work in highly tactical positions, or who are guarded about their knowledge, will struggle to survive in supply chain and procurement’s new environment, Lapierre says. But those looking to be part of the new order must look for ways to collaborate, be more efficient, streamline workflow and find ways to eliminate those more tactical tasks that take away from higher, more strategic priorities.

“If you have that mindset you’ll be fine,” she says. “I think procurement teams, or even supply chain, are not going to have more headcount. They’re going to look to streamline through technology. If you embrace that, if you’re someone who can either drive it or help drive it throughout the organization, I think you’re going to win a lot of points with your innovation team, your transformation team, your technology team, and open yourself up to so many more exciting opportunities.”

Back To School—Education adapts to a changing supply chain world