The results are in! The 2020 Canadian Truck King Challenge

Early this year we sent invitations to every manufacturer asking them to provide us with the relevant trucks; including the off-road versions, a market that we knew would be of interest to Canadian buyers. So, whether it’s the FX4, the TRD Pro, Rubicon, PRO-4X or ZR2 Bison, mid-size owns the off-road market. 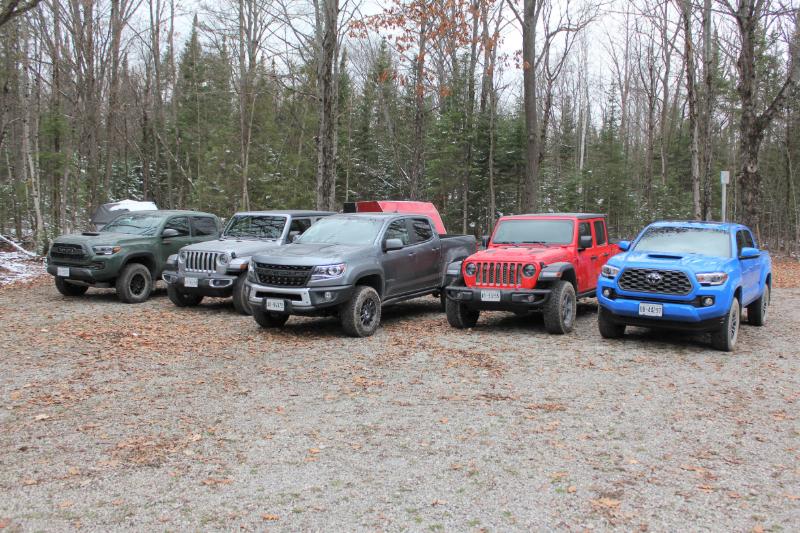 The builders all know that we’ve been pitting new pickups head to head for 14 years now, and some of them responded enthusiastically to this year’s mid-size challenge. However, some turned down our invitation. Each had their reasons. What were they? Doesn’t matter really— their absence speaks for them.

Included here are the builders who did decide it was important to compete and what they brought to the challenge.

The challenge is all about real-world testing. In other words, we use these trucks the way you, the consumer, would. As we do each year, we enlisted the aid of five experienced judges to drive the trucks back-to-back on our test loop. This year, with the mid-size truck capacities in mind we drove the Head River loop empty and then we did it all over again with 500lbs of payload in the beds. Finally, each truck towed a flatbed trailer loaded with 2,000lbs of concrete, giving each trailer a gross weight of 4,000lbs.

This ritual of back-to-back driving over the same 20-km test loop is what makes the Truck King Challenge unique. This routine gives each judge a chance to “feel” the differences in each truck as they drive over the same course, again and again. Over two very long days we manage to collectively drive more than 2,000km around this course.

There is always an off-road element to the challenge. But this year, because of the unique off-road trucks we had a chance to test, we spent significantly more time in the snow, mud and water.

Speaking of snow, we were dumped on with the largest single-day snowfall (for November 11) in 70 years, at least that’s what Environment Canada said. As I’ve said before it’s the Truck King Curse—we always get rained on during testing, but snow was unique. Though, it did make for some great off-roading video. That footage will be coming to our YouTube channel soon.

Also, of interest to consumers each year is our fuel study. Supported by Natural Resources Canada, we use electronic data collectors to measure fuel consumption during all aspects of our testing. What we offer is unique. Sure, we’ll tell you how the trucks performed while running empty—but we also do that analysis while the trucks are loaded with payload and while towing. Watch for the release of the 2020 Canadian Truck King Challenge Fuel Study in the coming weeks.

A word about our scoring. The final numbers are averaged from among all the scores submitted by the five judges. They are then converted to a percentage so we can offer a final score out of a possible 100.
Thanks to all who cared enough about their customers to participate. We are grateful for your support in our quest to bring meaningful real-world test results to Canadian truck buyers.

Toyota, with the oldest continuously built mid-size, the Tacoma, gave us two trucks. One for the street, the other off-road capable.

Apart from the crowd