Built in 1869, the 193km-long Suez Canal is a vital shipping link between the Red Sea and the Mediterranean, carrying about 12 per cent of world trade. It saves around 10 days between Asia and Europe as ships would otherwise have to go down the African coast and around the Cape of Good Hope. The grounding of Evergreen’s 20.124 TEU (20-foot equivalent units) Ever Given containership caused a one-week blockage of the Suez Canal at the end of March. 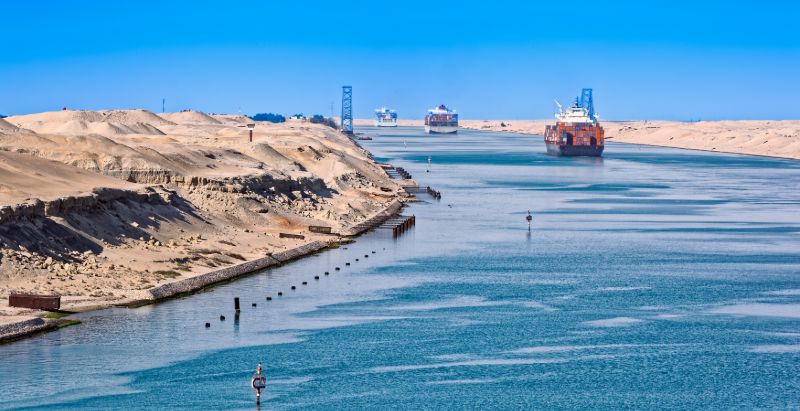 In our mediatized world, it quickly caught everyone’s attention, from supply chain professionals to the general public, exposing the fragile nature of global trade. The whole world could see thousands of containers loaded with Asian consumer goods stuck in the sand for a week and could imagine the other 400 and some ships that waited at both ends of the Canal for navigation to resume. Most had decided to wait it out, with only a few ships opting for the long journey around Africa instead.

The headlines carry other topics now and the world may have forgotten about the Suez Canal story, except for people connected with the shipping industry, and particularly companies whose cargo is still on board. Before we look at what can be learned, let’s summarize the facts. The Ever Given ran aground in the canal on March 23 and was freed on March 29. She then went to a holding area for inspection and would have normally been able to continue her voyage to Rotterdam but the Suez Canal Authority launched a US$916.5 million lawsuit against the vessel owners, as compensation talks between the SCA, the shipowners and their insurers dragged on. An Egyptian court then granted the SCA’s request for the seizure of the vessel and the Ever Given is again stuck in the Suez Canal, not in mud but in legal limbo, with all its cargo and crew on board. According to the ship owner’s liability insurers, the UK’s P&I Club, the SCA’s claim includes US$300 million for “salvage bonus” and another US$300 million for “loss of reputation.”

On May 11, the SCA reduced its claim to $600 million, still an unacceptable amount for the P&I Club, who took the issue to an Appeals Court. The Court referred the case to a lower jurisdiction, to decide on the legality of the ship’s seizure, until a settlement on the compensation claim is found. Until the ship’s fate is decided, shippers and consignees have to be prepared to dig into their purse or insurance’s wallet, as the vessel owners have declared General Average, a legal provision enabling them to get all cargo owners to contribute towards the costs associated with the incident. In a precedent case in 2018, the Maersk Honam, cargo interests had to provide bonds for 54 per cent of their cargo’s value, in order to get their merchandise when it was finally delivered at destination.

Who pays?
Who should pay between the shipper and the consignee is decided by the almighty Incoterm governing each individual transaction. Published by the International Chamber of Commerce in Paris and updated every 10 years, the Incoterms rules define the division of responsibilities between seller and buyer for the tasks, costs and risks involved in the shipping and delivering goods. Logic would tell us that whoever arranged and paid for the freight should bear the risks and the costs until the cargo has arrived. However, they don’t quite work this way as some of the most used Incoterms like CFR and CPT are counterintuitive: although the shipper contracts the carriage and pays the shipping costs up to the agreed place, goods travel at the consignee’s risks as soon as they leave the port or point of origin. This likely came as a nasty surprise for uninformed importers who have cargo on the Ever Given: they will have to dish out the money. This situation highlights again the importance of having adequate cargo insurance. In this case, no cargo has been lost but General Average costs are covered by standard institute cargo clauses, so for insured customers, it is their insurance that will be out-of-pocket.

Aside from selecting carriers carefully, having “just in case” buffer stock and not putting all your cargo on the same ship, lessons learned include the choice of Incoterm used in your contracts: if you want peace of mind, buy DAP, DPU or DDP when possible. On the other hand, using these terms means you have no control over the shipment. If you want to control your shipment, go with FAS, FCA or FOB: you then have full control, all the costs and all the risks. CFR and CPT should be avoided, as they provide the worst of both worlds: you have no control, as your supplier selects the carrier, arranges and pays for the freight, but you have the risks during the voyage.

If you want no risks at all, procure locally, which may become possible, if some meaningful reshoring of manufacturing takes place.

On the other hand, reshoring, or nearshoring, if it does happen, will take time and Canadians may not be prepared to feed exclusively on potatoes, cabbages and apples, and may very well want to continue to consume avocados, oranges and bananas, so globalization may be here to stay.

Logistics on the rock

A turning point for RFID?