From the February 2022 print edition

Predicting supply chain behaviour has been particularly dicey recently, but the pundits did get one call right – that Canada would run out of warehouse space in 2021. 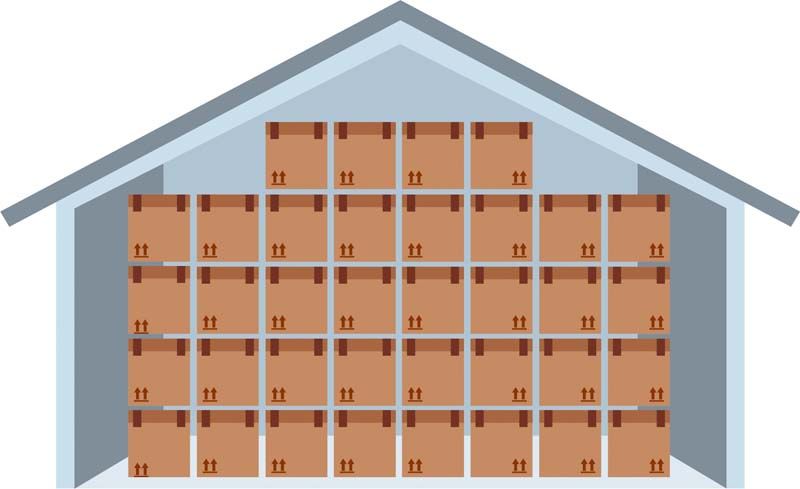 “The logistics sector ran out of space last fall,” says John McKenna, CEO of Mississauga-based 3PL McKenna Logistics Centres, noting that facilities like his would have been in an even worse bind if port congestion and the floods in BC hadn’t slowed incoming shipments.

“We’re finding that our clients are unable to secure not only warehouse space, but even find land in order to build a warehouse,” says Richard Kunst, president and CEO of Toronto-based Kunst Solutions Corp. “We’ve seen instances with people setting up temporary container spaces in farmers’ fields.”

Much of the pressure is coming from the growth of e-commerce. The difficulty is that facilities must transition from bulk fulfillment to handling large numbers of direct-to-consumer orders. Instead of moving a skid load of televisions, a facility might have to pick and process dozens of single-unit orders to move the same volume of product. This increases both space requirements and workload.

“E-commerce means that density goes down and the footprint sprawls,” says McKenna. “You also need massive packing areas because you’re processing orders, with a few items, at one time.”

E-commerce is not the only factor, though. As Kunst points out, irrational human behaviour, triggered by recent shortages, has made the situation worse.

“Because people have been starved for inventory, their natural reaction has been to order more,” says Kunst. “So, they’re just compounding the effect of this, and the supply chain is getting super saturated. They’re waiting longer, and they’re ordering more. You can imagine what will happen when that logistics chain gets untangled and all this stuff starts to land on people’s docks.”

Coping with difficulties
Many companies are undertaking reactive measures to squeeze more capacity out of their facilities, including putting trailers in parking lots, filling aisles with skids, and placing goods higher up. All these tactics, however, increase costs.

“Operations will utilize the building height when there is no square footage left on concrete,” says says Craig Gaulton, director of operations at Ingram Micro based in Mississauga, Ontario. “But you have to do so with a balance between operational efficiency and storage. Because if you go too high and too condensed, then it’s going to be outweighed by the cost of your operation, because now you’re into forklift cost.”

McKenna likens logistics in a full warehouse to a puzzle you get in a cereal box as a child. “You have to move five pieces just to get the one you want,” he says. “So, our handling costs go through the roof.”
Costs have also been driven upward due to higher rents, particularly in crowded centres such as the Greater Toronto Area. “The cost of warehousing space has more than doubled since 2015,” says Gaulton. “The average cost per square foot was $5.41. Now it’s going for $12.30.”

New warehouse space is typically leased out before the building is completed, but an air of uncertainty has developers hedging their bets. “A lot of investors like the returns they’re getting on real estate right now,” says McKenna. “The question is, how long is this demand going to last?”

A cautious attitude is also affecting capacity investments in shipping, rail and trucking. “All of these are major investment decisions that obviously aren’t taken lightly,” says Douglas Kent, executive vice-president of strategy and alliances at the Association for Supply Chain Management (ASCM). “With the unprecedented amount of disruption in the supply chain, people are really trying to figure out what is going on.”

Longer term strategies
The need to do more with less space is causing some companies to take a more scientific, data-
driven approach. “We use the engineers in our teams to watch the flow of goods and streamline that as much as possible,” says Gaulton.

One key metric for Ingram is the percentage of floor space usable for storage. “Our Mississauga building, for example, is 500,000 square feet,” says Gaulton, “but it’s not all storage. We’ve got aisles, driveways and processing areas. To optimize, you have to minimize your processing footprint.” A reasonable target, he says, is to bring that percentage down to 25 per cent of the total floor space.

Another important metric, Gaulton explains, is inventory turns – the number of times that the total value of inventory turns over annually. Numbers between five and six are typical in consumer electronics, he says.
Reducing storage requirements is also an option for some companies. “We do a lot of planning work with our clients where we break down the paradigm of ordering in big batches,” says Kunst, noting that a company he worked with was storing large batches in trailers, and was pulling trailers into a dock several times a week to refresh the pick faces.

Another issue is visibility. According to The Resilient Supply Chain Benchmark, a recent ASCM-sponsored study with the Economist Intelligence Unit, just over half of benchmarked companies based their supply chain view on internal data – typically on siloed or outdated datasets.

“If I’m operating a warehouse, I have to see deeper than my first connection points,” says Kent. “That goes beyond my suppliers to my suppliers’ suppliers, including tracing activities while in transport so I can better predict my own flow.”

Technology that makes it easier to link warehouse management systems with other elements in the supply chain is becoming essential for many companies, Kent says.

All these approaches will require highly skilled teams. “We’re gaining some capabilities and competencies that warehouse workers never had to have before,” says Kent.

The trend calls for not just stronger recruitment, but significant investments in developing employees’ skills over the long term. “Analytics, digital aspects of managing e-commerce, and inventory strategies are very transferrable skills,” says Kent. “So, we have to do more to make this career pathway attractive.”

Ahead of the curve

The Power of Transformation