From the August 2020 print edition

Disruptions this spring and their impact on Canada did not begin with COVID-19. Several trade disputes initiated by the US, primarily against China, but also Europe, Canada and other countries, resulted in merchandise trade volume falling by 0.1 per cent in 2019, according to World Trade Organization statistics. Rail blockades disrupted Canada’s supply chain, culminating in February and ending on March 5, about a week before COVID-19 struck, resulting in the lockdown. 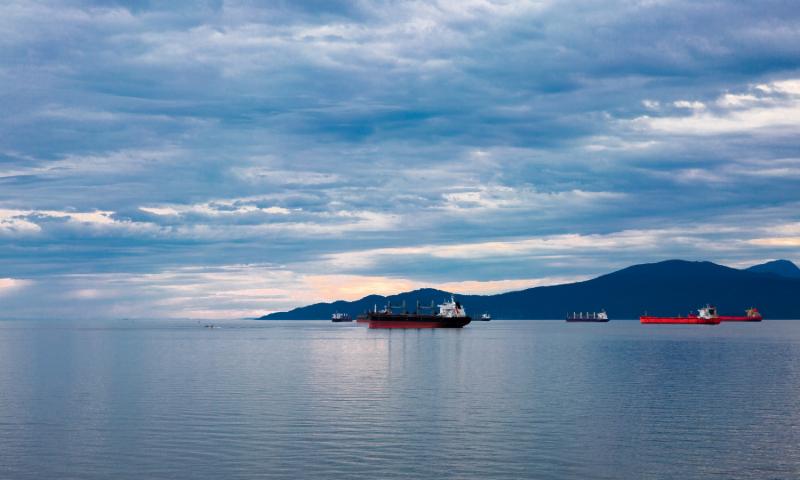 Although there is substantial domestic and US trade moving by vessel, this article will focus on overseas trade handled at Canadian ports. Let’s first look at Statistics Canada trade figures with countries other than the US. The March figures show a 4.1 per cent decrease of our exports and a marginal 0.5 per cent decrease of our imports. Reality bit in April, when our exports dropped 11.7 per cent and imports 6.3 per cent. In May, our imports were down 10.1 per cent while our exports registered a surprising rebound, increasing by 2.4 per cent. This was mainly due to commodities. These month-to-month fluctuations illustrate the evolution of the pandemic, as most of the world locked down in mid-March. To get the overall picture, we need to compare the January to May 2020 figures to the same period of 2019: then we see that our exports are down 34 per cent and our imports 31 per cent.
This has impacted our ports, though less dramatically than our airports. Airports around the world saw a 95 per cent reduction of passenger traffic practically overnight. Canadian ports active in cruise activity experienced a similar, abrupt reduction. When it comes to cargo, the pandemic’s impact has been slower, as the lead-time on ocean freight business can be several months. Some ports didn’t see much decline in volume until May.

The East Coast
We’ve reached out to our main ports to see how they had been affected and how they were getting ready for the post-COVID-19 recovery. Like others, Halifax has been operating as usual, with lower volumes on some lanes (for example, general cargo was down 20 per cent from April to May) but with fluid operations. The rebranded Halterm Container Terminal, now called PSA Halifax, got a new Super-Post Panamax ship-to-shore gantry crane on June 30. On March 21, the port welcomed its largest containership ever, CMA-CGM’s 14,414 TEU capacity T. Jefferson, operating between South Asia and North America’s East Coast. The port also installed a new vessel forecasting tool called eeSea.

The port of Saint John, NB has been holding its own, with ups and downs depending on cargo type. Comparing January to June 2020 to 2019, liquid bulk was up four per cent, dry bulk up 52 per cent, breakbulk down 61 per cent and containers up three per cent. The port is carrying out a $205-million infrastructure project to lengthen and strengthen the west side container terminal and deepen the main channel. This will allow Saint John to handle 10,000 TEU containerships, compared to 6,500 TEU ships today. A piece of welcome news was of CP Rail returning to Saint John, via their acquisition of the Central Maine & Québec Railroad.

In Montréal, the port has been operating smoothly through the pandemic, with overall volumes January to June down nine per cent. Container traffic dropped marginally (-one per cent) thanks to a strong first quarter and imports-exports are well balanced, an important feature in intermodal transportation. Dry bulk has been more affected (-22 per cent) and liquid bulk a little less (-eight per cent). The port has introduced several new tools: the Epicenter project, led by the Port of Antwerp, to improve fluidity and performance; TradeLens, an interface dedicated to freight developed by IBM and Maersk; and Scale AI, a tool developed by CargoM to improve the handling of critical cargo, to name a few. In June, the port was named a Marine Industry Trusted Partner for COVID-19 by the Chamber of Marine Commerce.

The West Coast
The latest data from the port of Prince Rupert reveals that overall cargo volumes were up nine per cent in May, led by strong dry bulk volumes, both for the month and year-to-date. The addition of propane volume from the AltaGas Ridley Island Export Terminal, operating just over a year and strong demand for wood pellets have contributed to the port’s performance. The intermodal sector has been the one impacted most by the pandemic, with May showing a 37-per cent decline from May 2019, leading to a 12-per cent year-to-date reduction in container volumes. Nevertheless, several infrastructure projects are advancing: construction of the Fairview-Ridley Connector Corridor, the Ridley Island Export Logistics Platform and the Metlakatla Import Logistics Park on South Kaien Island.

The Port of Vancouver’s overall container movements from January to June were down 6.1 per cent, with imports down 2.1 per cent and exports down 10.2 per cent. Technology is highlighted by the Port Dashboard, which provides real-time monitoring tools for port users and stakeholders, plus supply chain performance metrics. The new G3 Terminal Vancouver,
a grain transloading facility, opened July 9, providing improved tools for Prairie exporters.

Although the pandemic has impacted ports with lower volumes resulting in reduced revenue, they have been operating smoothly and preparing for a post-COVID recovery. World Bank data highlights the importance of Canada’s international trade: exports of goods and services represent 32.13 per cent of Canada’s GDP, while imports represent 34.09 per cent. Canada’s ports must continue to play a crucial part in supporting our international trade activities.