BEIRUT (AP) — Lebanese and international organizations Wednesday called on the UN Human Rights Council to send a fact-finding mission to investigate the Beirut port blast two years ago, as a domestic probe continues to stall. 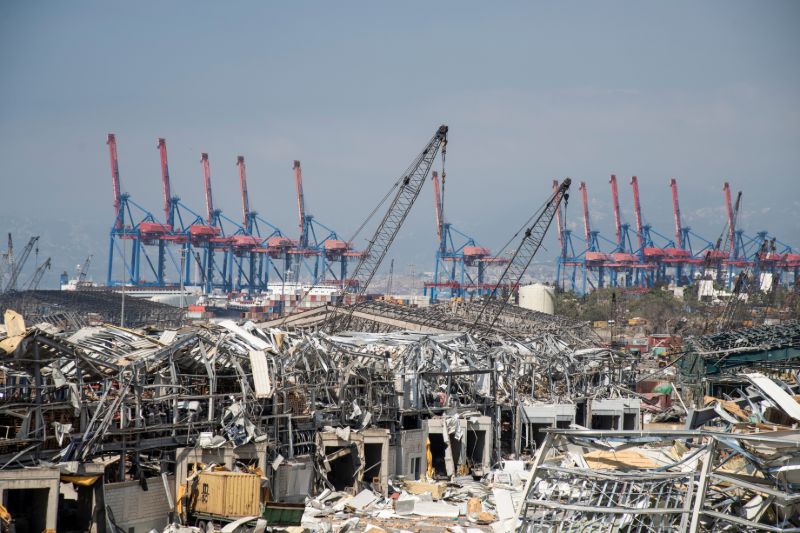 The call by groups including Human Rights Watch and Amnesty International came as the Lebanese investigation has been stalled since December following legal challenges by charged and accused officials against the judge leading the investigation. The Aug. 4, 2020 blast killed nearly 220 people, injured over 6,000 and caused widespread damage in Beirut.

The call also came amid concerns that a large section of the port’s giant grain silos, shredded by the massive explosion, might collapse days after a smaller part fell following a weekslong fire of fermented grain ignited by the scorching summer heat. Lebanese authorities closed a main road outside the port and directed traffic into internal streets as a precautionary measure.

The northern block of the silos has been slowly tilting for days since the other part collapsed Sunday.

A group of UN experts also called Wednesday for an international investigation saying “this tragedy marked one of the largest non-nuclear blasts in recent memory, yet the world has done nothing to find out why it happened.”

The organizations called on the UN rights council to put forward a resolution at the upcoming council session in September that would dispatch “without delay, an independent and impartial fact-finding mission” for the explosion.

They believe the mission would establish the facts surrounding the explosion, including the root causes, without political intervention. This would support the victims’ campaign for an effective investigation, they said. The groups want to establish state and individual responsibility and support justice for the victims.

Many have blamed the Lebanese government’s longtime corruption and mismanagement for the tragedy considered one of the largest non-nuclear explosions in history when hundreds of tons of highly explosive ammonium nitrate, a material used in fertilizers, detonated at the port.

Official correspondence between political, security and judicial officials reveal that many were aware about the hazardous substances unloaded in the port a decade ago without taking meaningful action to remove it.

After the blast, port, customs and legal documents revealed that the ammonium nitrate had been shipped to Lebanon in 2013 on a worn out Russian ship and stored improperly at a port warehouse ever since.

Tarek Bitar, the judge leading the Lebanese investigation, charged four former senior government officials with intentional killing and negligence that led to the deaths of dozens of people. He also charged several top security officials in the case.

None of them have been detained and two of those charged were re-elected to parliament in May.

An initial investigation by Human Rights Watch points to the potential involvement of foreign-owned companies, as well as senior political and security officials in Lebanon.

“It is now, more than ever, clear that the domestic investigation cannot deliver justice,” the groups said adding that the establishment of an international fact finding mission mandated by the UN Human Rights Council is “all the more urgent.”

The group said that previous calls by survivors of the explosion and families of the victims remain unanswered.

“As the Lebanese authorities continue to brazenly obstruct and delay the domestic investigation into the port explosion, an international investigation is the only way forward to ensure that justice is delivered,” said Diana Semaan, acting deputy director at Amnesty International.