By Russ Bynum THE ASSOCIATED PRESS On Sep 9, 2021
Share

SAVANNAH, Ga. (AP) — Two years after a cargo ship overturned along the Georgia coast, heavy lifting to remove most of the vessel is nearly done — though further breakdown of the wreckage and final cleanup is expected to take several more months. 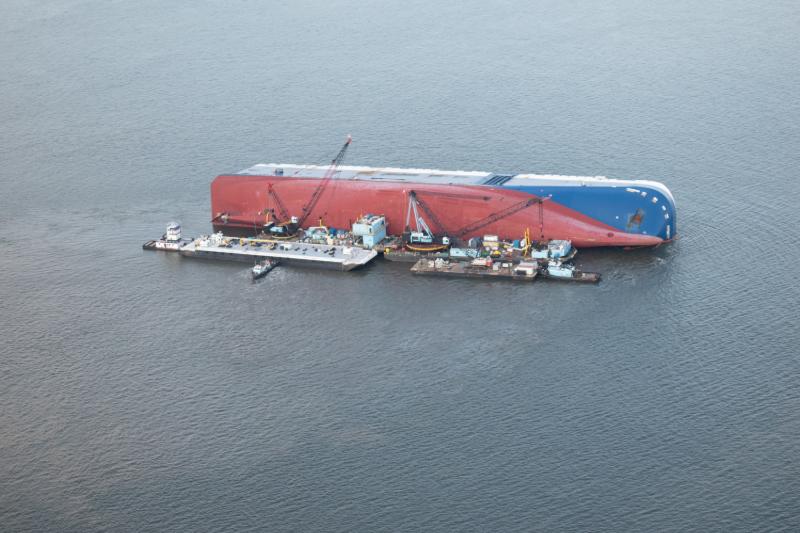 Wednesday marked the second anniversary of the capsizing of the South Korean freighter Golden Ray, which tipped over shortly after departing the Port of Brunswick on Sept. 8, 2019. The crew was rescued safely. But hauling away the shipwreck, including its cargo of 4,200 automobiles, turned into a slow and messy demolition effort.

Roughly three-fourths of the vessel’s remains have been removed since November, when salvage crews began slicing the shipwreck into eight giant chunks. A towering crane straddled the wreck, using brute force to drag a length of anchor chain through its hull like a blunt-edged saw.

On Wednesday, only the last two big sections remained in the water off St. Simons Island, about 112km south of Savannah. The final cut to separate them was finished over the weekend.

Workers used a mechanical crane to pluck cars and SUVs from the interior of one remaining section, to shed some of its weight before loading it onto a barge in the coming days, said Coast Guard Petty Officer 2nd Class Michael Himes, a spokesman for the multiagency command overseeing the demolition. Another barge is being prepared to carry the ship’s final section, and isn’t expected to be ready for at least another week.

“It’s obvious that we are very close to the end of this wreck removal phase,” Himes said. “We are committed to being as safe now as we were throughout the response. So slow and smooth and steady helps us stay safe.”

Even after all giant chunks of the shipwreck are out of the water, the salvage job will be far from over.

At least three sections of the ship, possibly four, will need to be broken down further at a local dock before they can be transported by barge to a scrapyard in Louisiana. Himes said that should take several months.

Meanwhile, crews will need to recover cars and other debris that fell into the water as the Golden Ray was being carved into giant pieces. Then they have to remove metal shipping containers and rock placed around the partly submerged wreck to stabilize it during demolition, as well as take down the giant mesh barrier installed around the site to contain debris.

Those cleanup efforts at the wreck site are expected to take a month or two, Himes said.

“The riskiest parts, as far as new pollution, are close to being done,” Sams said. “Once they are able to lift these last two sections and put them on a barge, I will be breathing a sigh of relief.”

Sams and other conservationists watched in dismay in late July when oil gushed from a newly separated segment of the shipwreck and fouled roughly 4km of beach and marsh grasses. The salvage team dispatched cleanup crews, but Sams says he fears there could be long-term damage. He said various leaks over the past two years resulted in roughly 50km of shoreline polluted by oil, much of it environmentally sensitive marsh.

Sams has asked the multiagency command overseeing the demolition to conduct a formal assessment to determine the extent of the ecological damage from the wreck. He said he’s been told no decision will be made until the removal and cleanup are complete.

“The end is in sight,” Sams said, “but we still don’t have an answer to how much damage has been done.”